From Kirkland to Crete

We were once again reminded that getting from our home in Kirkland in the Pacific Northwestern United States to the southern coast of Crete on the Lybian Sea is a trip of endurance. . .and one in which about half way through we start asking ourselves if there wasn't someplace a bit closer that we could have been as happy visiting.

We left Kirkland at 3:20, catching a Metro bus to downtown Seattle and there hopping aboard the Link train to Seatac. 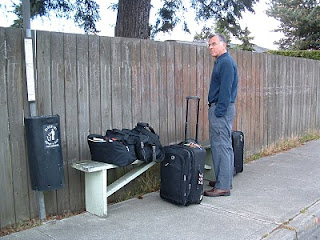 Our luggage for our month-long adventure consists of two roll-aboard size suitcases which we checked and two small carryons. Here Joel waits for our bus to Seattle.  Our total trip to Seatac cost $5.50 per person, took just over an hour and didn't require any friends to have to face rush hour traffic to drop us off. 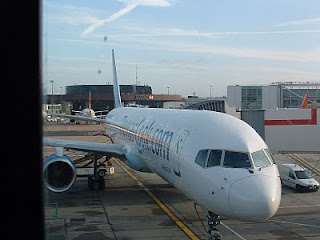 Our British Air flight whisked us south of Iceland and nine hours later we were in London. We caught a bus at Heathrow and 40 minutes later we were at Gatwick where we overnighted and waited for our 3.5 hour flight to Crete.  For those who've followed the blog you know we flew thomascook.com, one of Europe's cheapie airlines.  Our plane was a Boeing 757, the food service (we had purchased in advance) was quite good, checkin a snap. . .the only thing we had against it was the cramped seating.  When I start having leg room issues you know the seats are cramped.

We rented a car in Heraklion over the internet and the rental went smoothly - we were on the road 10 minutes after getting to the car lot.  We pulled into our destination Chora Sfakia (Hora Sfakia) at 5:30 p.m. Friday and went in search of a hotel.
Posted by Jackie and Joel Smith at 5:16 AM