On the Road to Eastern Crete 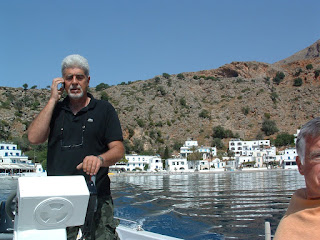 We still had much of Crete to explore so we caught a taxi - our driver is pictued above - talking on his cell phone as he takes us from Loutro to Sfakia.  It is interesting to see in these remote villages how little, if any, internet is available but cell phone are commonplace.

We followed the southern coast heading east to a beachfront spot we had driven through last fall and vowed we would return to if we got back to Crete.  While we couldn't quite remember the details, we recalled a garden, a beautiful garden that we hoped was in front of a tourist accommodation.

There is no direct route on the south coast, as the only National Road, follows the northern coast cities so to get anywhere on this side of the island we needed to head up into the hills and then back down. 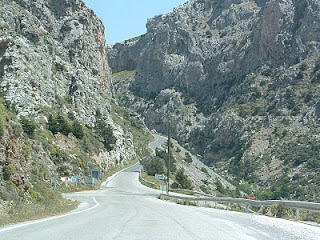 It took nearly four hours to drive the 192 kilometers we traveled that day.  We wound up into canyon's as pictured above and then down onto coastal lands, eventually coming to the place we had remembered: Kastri, a strip of development on the Lybian Sea. 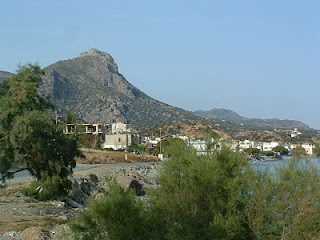 We were here in this small village the day our US stock market had its free fall - but the only television in the town's tavern was reporting non-stop of the riots and deaths in Athens. . .while it appeared all hell was breaking loose there our big entertainment was watching the knife-sharpener come to town and sharpen knives for the two tavernas that were open. 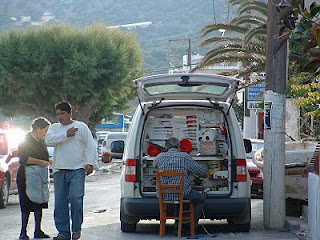 Posted by Jackie and Joel Smith at 3:31 AM