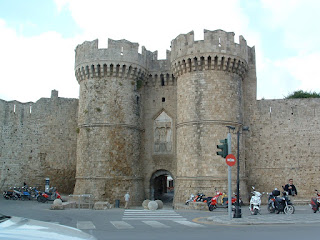 "You'll either like Rhodes or you will love it," is the opening line from Lonely Planet's guidebook section on this Dodecanese island. A more appropriate opening may never have been written. . .from the books we had read (travel guides and novels) we thought we would like Rhodes, and now on our fourth day within the walls of the medieval city we are pretty smitten with this place.  It isn't every day you get off a ferry and head to your hotel through a gate such as this one; the Marina Gate. 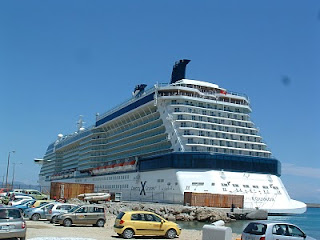 We are back in the land of mass tourism though, unlike our travels in southern Crete where we often were among much smaller numbers of tourists.  Here they arrive by the thousands on a variety of cruise ships.  We counted seven such ships in the harbor outside this gate two days ago and yesterday only the mammoth Celebrity Equinox brought hordes of day-trippers to the town.  The cruise ships these days reach far higher han the fortress walls. 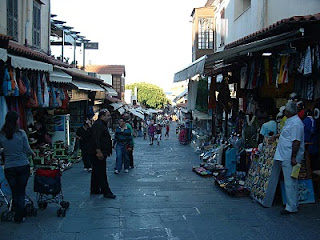 During the day it isn't unusual to be greeted with the question, "You from the cruise ship?" so we try to focus our explorations away from the heart of the tourist trek lined with hopeful vendors. 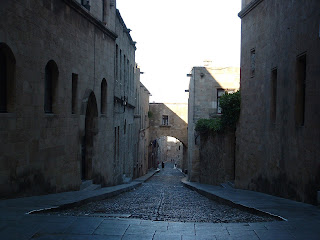 But by late afternoon the tour groups have loaded into their buses or have ambled back to their cruise ships and the streets and alleyways empty and call out for contemplation and exploration
Posted by Jackie and Joel Smith at 5:29 AM