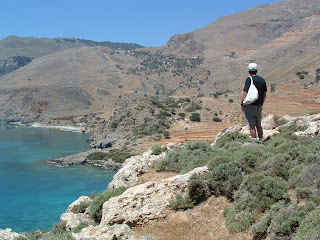 "You know," I called out to Joel who was several meters above me, "travel really does make you stretch yourself, doesn't it?" Enveloped in a sun induced thyme aromatherapy, we had set out on a path leading us from Loutro Bay up among Venetian ruins. 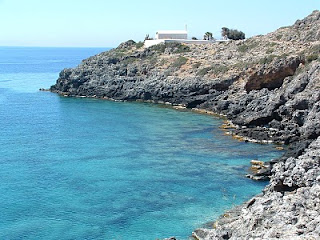 .  We'd taken a picnic lunch up to the stone table outside the village's church perched on a cliff. The day so clear that in the distanc we could see Gavdos Island (the history of this area goes back so far that St. Paul refers to the island as "Cauda" in Acts 27: 12-16). From the church, we followed a level footpath past the remains of a village centuries ago abandoned. 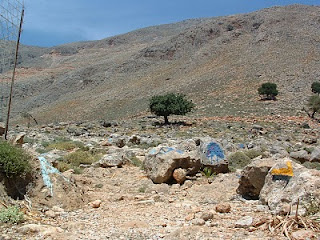 Paths are marked with blue, black and yellow paint which means something to those who hike regularly.  It was when we spotted a path marked with orange "A" that we decided to veer upwards, it appeared a gentle slope through the thyme. But the gentle path turned into a goat trail and at the point I called out to Joel I was seeking a foothold on a rock and grasp a thyme plant above me to haul/crawl in a rather unlady-like manner to the next level.

It took a bit of work, but we reached the top and had a fantastic view of Phoenix (Fenix) the next bay over.  We saluted our atheletic abilities and have decided the letter A must mean, "Athletes only."
Posted by Jackie and Joel Smith at 3:10 AM