Lest we forget. . . those five days in Crete

Our travels in Greece have been a doorway into history for us.  Not just to the ancient civilizations but also into much more recent history. So, on this Memorial Day we remember the many lives, both military and civilian, sacrificed here during World War II. 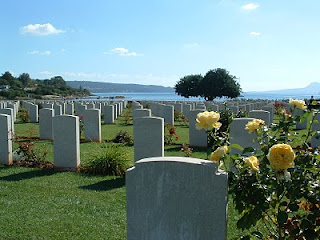 In particular, we remember those final  five days of The Battle of Crete - May 28 - June 1, 1941- when thousands of Allied troops evacuated to Alexandria on British and Australian war ships from the harbor at Chora Sfakia, on Crete's southwestern shore, while others*, primarily New Zealand troops, held off the Germans.  The Suda Bay War Cemetery, near Chania, on Crete's northern shores should be a required stop for all visitors to this island.

New Zealand, Australian and Greek troops made their way to Chora Sfakia while other Allied troops ambushed the advancing German troops.  The road they walked ended three kilometers and 500 meters (about 1,600 feet) above the harbor town, leaving them to make their way down the steep hillsides.  British and Australian warships evacuated 11,000 - 18,000* men  before the Germans overtook the Australian rear gear, capturing 5,000 - 12,000*.
*Vary by source. 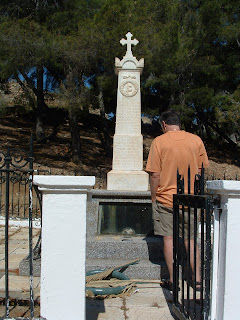 While we Americans have set aside Memorial Day as a time to remember those who have fought for the freedoms we enjoy, in Crete such remembrances are part of every day life. We found memorials along busy roadways, tucked away in remote areas and often the centerpiece of town squares.  While we couldn't decipher much of the Greek inscriptions we understood the date: 1941. 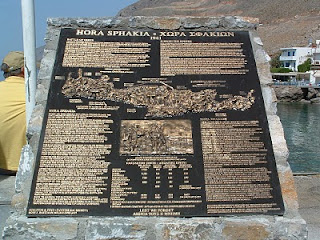 In Chora Sfakia, the unassuming little harbor town, that has won our hearts, a new memorial has been erected overlooking the harbor that tells the story of the evacuations that took place here. . . "lest we forget."
Posted by Jackie and Joel Smith at 4:56 PM