The Spirit of Solstice

There they were, all lined up greeting us as we returned to the Solstice at the end of our visit to Lisbon.  The Captain (on the left) and his team just wanted to welcome us back.

That’s something we’ve not experienced on previous cruises - we can’t recall ever being greeted by the ‘management team’ except at the official welcome cocktail party. Returning from shore excursions we expect staff members to offer water and hand sanitizer, but the ‘top brass’ greeting – that’s a new one. 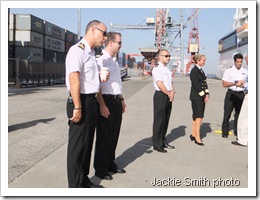 That same team put those smiles aside the next day when in Malaga, Spain when the Spaniards decided to pull a work slow-down that affected four large cruise ships in port that day.  Tours returned late and then Spanish security decided to slow things further by ‘wand’ checking each returning individual. . .thus threatening to delay our departure. Our captain and his team went to work and got us all back on board, with only a slightly delayed departure.

(Note to Malaga tourism: some of our fellow passengers were so angered , don’t expect to see them again anytime soon.)

However, the following sea day – our last  – the team was smiling again. 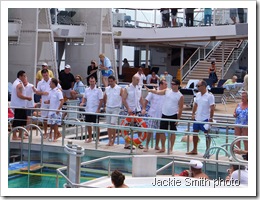 The photo to the right is a group of managers (our captain far right) who challenged a team of guests to a water volleyball game.

And it wasn’t just management, everyone on this ship added a personal touch to service.

Our room attendant, Agostinho Fernandes, who’s been with the company for 10 years, would head to our door to unlock it and hold it open for us the minute he saw us in the hallway – even though our keys were out.

There was the attentive assistant restaurant manager, Flavio, who helps oversee operations in the immense  dining room who  asked,”Is everything okay? You’ve been gone two nights.” (We had eaten elsewhere and were amazed that he had noticed our absence with hundreds of others filling the tables.)

The ship’s Hotel Director Sue Richardson, (she’s in the top photo) says it is what they call it the ‘Spirit of Solstice’.

“It is the most critical piece,” she explains, adding, “And the team spirit is outstanding. The Captain is an inspirational leader, he just continues to motivate and inspire the team.”

It’s that  Solstice Spirit that made it hard to leave the ship last week but happy that we will be sailing it again in 2012.
Posted by Jackie and Joel Smith at 6:32 AM