Solstice: Entertainers with a Capital E!

There’s been so much to see and do on this ship the last week, that we are in need of rest – our first port day feels like a rest day. Is that too much fun?

Entertainment is never ending – someone is always performing at poolside or on the aft deck  throughout the day and then it moves inside about 5 p.m. with someone  playing a piano, or a string quartet will be playing, or a sole singer strumming a guitar will sing songs of our youth (that would be gonzo geezer youth, you recall).

And the guests, well, they dance.  Some dance at the pool in their swimwear. They dance in the late afternoon, some dance at noon in the middle of the ship when the dance lessons are offered, some dance the evening away.  We headed to the cabin last night at 10 and there were a number of folks (many older than us) just starting to kick up their heels.

The BIG entertainment is that which takes place in the theater – and we have had some fabulous shows (sorry, HAL, but the entertainment on board is better than our Holland America cruises).  Last night we had a variety show as many of the performers leave the ship in the Azores and new performers join us. 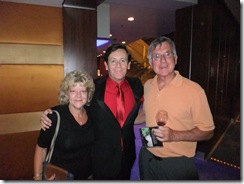 We said goodbye to a favorite – and one we hope to see on stage in London some future visit because he’s been in plenty of musicals there to date – and that was Paul Baker. He’ll be joining another Celebrity ship and sometimes can be found on Crystal ships.

Our ship is so much fun that our captain, and that would be Captain Gerry Larsson-Fedde, who has brought us safely across the Atlantic, left the bridge last night and picked up his electric guitar and joined one of our singing groups on stage. I don’t need tell you that he brought the house down, do I? 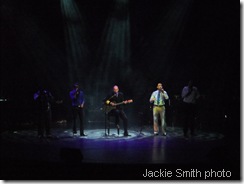 A day at sea tomorrow and nNew entertainment tonight. . .I’ve got to go rest. . .more soon.

Posted by Jackie and Joel Smith at 7:36 AM