The midnight hour.
It has a nice literary ring to it, doesn’t it?

But it's not something I’d given much thought, until I read a  post on the  Baltimore Sun’s web blog a few weeks before our departure, written by John E. McIntyre, that pondered the questions:

And what does that have to do with travel?

Well, quite a bit. Take midnight in Spain. It's dinner time there. Unlike our Kirkland lives where the middle of the night is when you wake up and take a 'trip to the bathroom'.

That presented a challenge: would we dine at midnight or at least at the respectable dinner time of 10 p.m. or later? Answer: no.  We tried, but couldn't last that long. 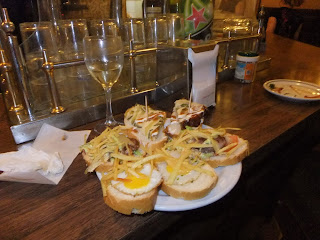 In fact, we thought we were doing well to still be tapeo-ing (making the rounds of tapa bars) at 8 or 9 in the evening. And after eating tapas then, we really didn't have room for a real multi-course meal.
(And that plan of mine to search for flamenco's duende - that Spanish show of 'soul'  fell through when I couldn't make it until the 1 a.m. showtime).

There is no escaping the impact of travel on time.

Back home during our first night in Kirkland, I woke at 1 a.m. -  no, not for a potty run.  I was hungry! By my tummy time I'd 'missed' breakfast and it was nearly time for lunch.

Dang, if only it had happened in Madrid!

Note: Click on the 'flamenco' above for a taste of flamenco on YouTube.
Posted by Jackie and Joel Smith at 1:57 PM