This Spanish charmer has caught us up in its spell. – we are caught up in it as we stroll its wide boulevards in the morning to reach one of its enormous parks, gardens or palaces. And again when we’ve stroll to our neighborhood bars on our evening tapeo, the sipping of wine and eating small tapas, in the early evening hours of 7 – 9 p.m. 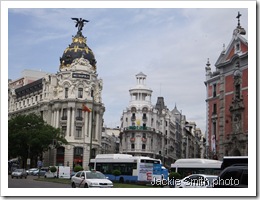 We had no preconceived notions about the place – we’d done our usual research and it sounded like a logical stop since the cruise ended in Barcelona, a bit less than  three-hours away by train.  And a week, we thought, would give us time to explore other cities on day trips. . .perhaps  Toledo or even Valencia. . . Ha! We can’t get to everything we want to see in Madrid.

There is literally something to see on every street in the part of town where our apartment is located; the Barrio de las Letras (or Cortes) where now famous writers once lived. We are just down the street and around the corner from where Cervantes, who brought Don Quixote to life, spent his final years and died. 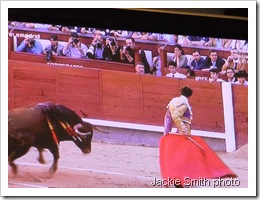 We are here, as I mentioned before, during the Feria San Isidro, the Festival of Madrid’s Patron Saint Isidro, which means that bullfights are taking place each day of the week, several times a day.  And they are so popular tickets have been sold out for weeks in advance. . .but they are televised, complete with pre-contest comments and sideline color and play-by-play announcements.

(Note: My photo is of a television screen).
Posted by Jackie and Joel Smith at 6:04 AM