In London “with” the Obamas

You know our US President is into social media. . so that, along with recent travel overlaps, has me thinking that  someone in America’s First Family reads Travelnwrite!  Why? You might ask. . . 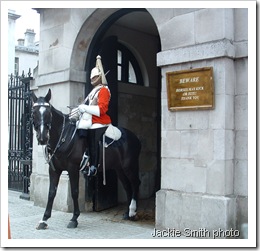 Okay,. . .because we’ve been here twice and each time we’ve come to London, the Obamas have also arrived.  I think they are liking our destinations because here we all are again. . .’doing’ London. Thursday we all head to France.

And after seeing a US newspaper today, you folks back home don’t have all the details that the British media are providing about their visit, so I decided to give you my account of  ‘Two Cities’. . .ours and theirs.

Saturday afternoon the Smiths walked up to our hotel entry, hauling our own bags, after the world famous accuracy of the London Black cabs  failed us and our driver dropped  us behind the hotel – pointing out that we could reach it by walking  through a maze of construction scaffolding, around the corner and down a block and we’d be at the front entry. The doorman welcomed us warmly.

The Obamas ,of course, have traveled in Air Force One, a helicopter and a bullet- and bomb- proof SUV; their “Beast”, the iron-plated Cadillac, they’d shipped over got stuck on a ramp at the US Embassy in Dublin yesterday so they used the SUV. The vehicle didn’t matter though as thousands  of people along their route have greeted them with rock-star-fan enthusiasm. 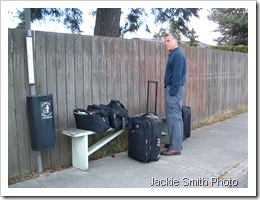 The Smiths have two carry aboard sized roller bags, two shoulder bags and my Baggallini purse. I suspect they have a few more bags as all the headlines report what a fashion plate our First Lady is. . .I haven’t seen me -- or my hand-washable Chico’s fashions --mentioned in any of the local newspapers.

The work done by the Smiths these days can easily be accomplished on our Netbook  which we carry with us.
In contrast, the Obama’s have 1,500 people in their entourage – including chefs, doctors and who knows who all else.

The Queen is hosting a dinner for them this evening. Obviously, someone forgot to mention to her that the Smiths from the ‘Other Washington’ were in town or we would undoubtedly have been invited. We will be dining at the pub around the corner.

Tomorrow evening Mrs. O. and the Prime Minister’s wife are putting the hubbies to work bbq-ing at 10 Downing Street – as they are hosting a dinner for invited military families. Obviously they didn’t know of Joel’s barbeque talents or he’d be there cooking as well.

We thought about dropping by the American Embassy and saying hello today but the rows of fencing, and lines of armed guards – not to mention a  low flying helicopter hovering overhead, didn’t quite make us feel welcome so we continued our stroll. I think the helicopter was keeping an eye on the Obamas . . .well, it might have been keeping an eye on us as well, since I felt the need to take a photo of it.

The Obamas are spending two nights at  Buckingham Palace where they (the Obama’s) have installed bullet-and-bomb proof windows in the suite where they will be staying. 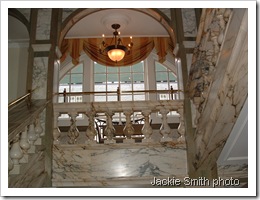 The Smith’s are quite content to be in their own palace-like digs at the Chancery Court Hotel on High Holborn.  The windows keep out the sound of traffic and that’s the only thing we need worry about. . .which makes me  think, it really is nice to be nobody!

But just a note to the Obamas:  if you need help flipping burgers tomorrow, we could be there!
Posted by Jackie and Joel Smith at 12:59 PM

Email ThisBlogThis!Share to TwitterShare to FacebookShare to Pinterest
Labels: London, Obamas in London