Memorial Day: Lest We Not Forget

Before we began traveling to Europe, what we 'boomers' knew of World War I and II came from teachers and textbooks, historical novels, movies and television, and a few tales – that were seldom offered without great encouragement – from family members and friends who had lived through those years. 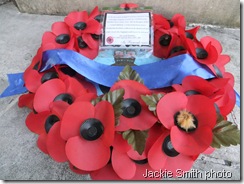 In recent years, our travels have in Europe have made real those snapshots of history that once were but words on a printed page or on a television screen.  We’ve visited cemeteries and stood before war memorials.

But often we’ve been reminded of war’s impact in the most unexpected of places.  . . like the pub in London – Shakespeare’s Head Pub on Carnaby Street – where a bust of the old Bard above the entry is missing a hand and a sign tells us it was blown off when a bomb fell, obviously, not far from where we were standing.

Or even as we descend deep into the earth to reach the subway, thinking of the many who once took shelter in these same tunnels seeking safety from those falling bombs. . .

We pause at every memorial for each tells a story about those who fought for what they believed, others who were innocent victims of a war taking place on their homeland and others who traveled to foreign soil to fight for freedom, putting  the call to service before self.

Their unselfish actions then, gave us the freedoms we enjoy today, among them the freedoms to travel. . .and to write. 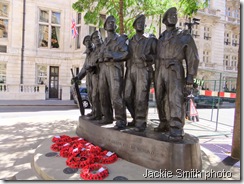 So on this Memorial Day, we say, “Thank You” to the many to whom we owe so much.

“Lest we not forget.”
Posted by Jackie and Joel Smith at 9:16 AM