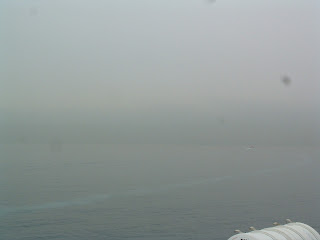 Sea and sky blend somedays
We set out after our cruise for Aegina, (aye-ena) the closest of the Saronic Islands to Pireaus on a day so gray that the sky and the sea merged into a bleak panorama and arrived at its charming harbor town under threatening skies.  The skies cleared and we spent two nights in a charming 200 year old mansion converted to hotel some 25 years ago.

We chose Spetses island for our next destination - about two hours from Aegina by slow ferry and we set out on a day as gloriously spectacular as our previous trip had been gray.  And we have fallen under the charms of this place and will spend our fourth night here tonight before setting out to explore the mainland.

Saturday afternoon we explored the island on foot - 9.5 miles later -- we had crested its highest peak and  walked among olive groves and pine forests.  This is the island where author John Fowles lived and worked when he wrote his epic, The Magus.

We have had sun and blue skies and last night a storm moved in that lit the skies with lightening strikes, thunder boomed and rain came down in sheets.  Today the rain continues.  I sit in the lobby of the one hotel still open that has internet access -- the only woman in the lobby, by the way and certainly the only one with a computer -- awaiting Joel who has visited the local barber.

We are staying in a charming hotel for 35E per night - having been convinced by the owner, Petros, when we stepped off the ferry that it was a great place.  He was right - we hope to return someday.
Posted by Jackie and Joel Smith at 1:27 AM