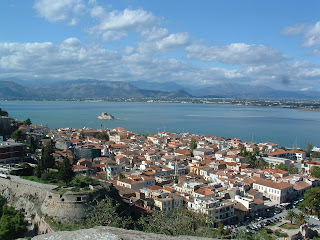 Nafplio from the Fortress
It is a sunny Saturday afternoon in Nafplion and the Square below our room has come to life with weekend visitors from Athens.  The cafes are full, a game of soccer is being played by local children on one side of the marble-paved square and a street performer is entertaining other children and cafe patrons on the other side.  Laughter and conversations fill the air.

There's been so much to see and do in this area that we've used Nafplion as a base (staying five nights) and have taken day trips by car and explored the town on foot. . .driving in old Nafplion is a tights squeeze at best so we park at the port's free lot and walk a few block to our hotel (which is in a pedestrian only area anyway).

We realized a few days ago that we had gone for nearly a week without seeing another American; in fact that last time we had spoken to Americans was when we called out goodbye to our Florida friends at the cruise ship in Piraeus.

Our first night here we met three delightful young American women who are studying in Athens and who were in town for a four-day study of the archaeological sites nearby.  Monika from USC, Soula from Michigan and Clare from Notre Dame gave us an introduction to the sites that we would be seeing and we had some good ol' football -- not soccer -- but football, talk from home.  We saw two of our trio atop the cliff at the fortress the next day and had hoped to cross paths again but it didn't happen.  "Yassis" to you all - hope to see you again one day.

People often ask us about places and begin with, "But what is there to see?"  Our short answer is "Life." And one of our favorite from this trip is the nightly scocer game that beings about 6 p.m. on the Square.  A group of tousle-topped boys gather and anywhere from one to three soccer balls appear.  The boys appear to be between the ages of 6 and 10 but often a grown man walking by will take a kick or two and last night a toddler - a bit bigger than the ball - wove his way in and out of the big boys.  It made for great entertainment - we can hardly wait for tonight's game!
Posted by Jackie and Joel Smith at 3:50 AM