In the Land of Legends and Myths: Mycenae 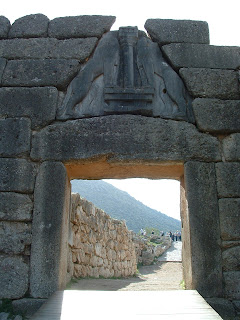 Lion's Gate - Mycenae
We are traveling through the land of myth and history.  The Peloponnese countryside -- less than 200 kilometers from Athens -- is awash in history; so much so, that we've had to pace ourselves by taking one 'time travel trip' each day back into history.

We are not history buffs, nor do we know that much about Greek mythology.  But when you visit a place with ramparts dating to 1350BC -- yes, that is BC!-- there's no other word for it than: overwhelming.

Once thought to be found only in legends and poetry, Mycenae was the most powerful city-state in Greece up to 1100 BC when it was destroyed by fire.  The site was discovered in the late 1800's - confirming the existence of a real city and people.

We entered the old city through the Lion Gate -- pictured above -- that dates back to 1240 BC and is considered the oldest sample of monumental sculpture in Europe.  The remains of the city's granary still stand as well a burial grounds and artists quarters.  Traces of grain were found on ceramics excavated there and now on display in the museum to the side of the city.  Finished beadwork, uncut ivory and gold leaf were found in the artists' quarters.

According to Greek mythology Mycenae was founded by Perseus, son of Zeus and Dianae.  He employed Cyclops, mythical beings from Asia to build the city thus the style of architecture is called cyclopean.

The museum off to the side houses display cases filled with ceramics and art found at the site.
The entry fee was 8E per person which provided access to the city and the museum.  There are restroom facilities on site as well as a snack bar.  And numerous fellow visitors were using canes to get around but easily managed the well maintained - but sometimes steep - stairways.
Posted by Jackie and Joel Smith at 5:43 AM