We had four stops in Turkey: Kusadesi, Istanbul, and then on the Black Sea coast we visited Trabzon and Sinop.  We thoroughly enjoyed the sights, sounds, smells that signaled we were visiting places far from home.  The call to prayer that echoed at regular intervals, the spices, the colors, the people. . .we agree that it would be fun to return to each of these places and spend more time (especially Istanbul) than a cruise stop permits. 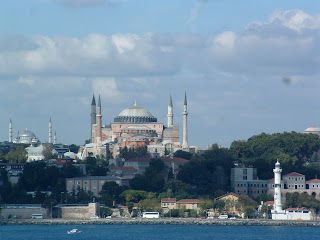 Istanbul
We don't know Turkish though - unlike with Greek words, where we know enough to at least be polite in greeting - so in Turkey we were limited to polite smiles, head nodding, gestures and in some cases, total gaffes.  And I must admit, I was the worst offender:

When visiting mosques all must remove their shoes before entering, all are to be appropriately dressed (no bare arms, shorts or inappropriate clothing) and women must wear head scarves.

While in Trabzon we decided to visit an impressive mosque in the heart of the bazaar area.
We both removed our shoes.
Joel entered the mosque while I stayed outside wrapping a scarf around my head.
An elderly Turkish man spoke to me and gestured upwards.  I followed the gesture and admired the ceiling.
He repeated the statement and gesture.
I looked again and turned to him, bowing slightly and said, "Beautiful, simply beautiful." (in English) and then followed Joel into the mosque.
We sat side by side and admired the interior.

As we walked out to my total mortification I realized what the elderly man had told me when I saw a woman heading upstairs to the women's section, clearly marked "Beyan" with an arrow pointing up the stairs.

We've learned two Turkish words this trip: bey (men) and beyan (women); and they won't soon be forgotten.
Posted by Jackie and Joel Smith at 6:45 AM