Bye to a Bleak and Blustery Black Sea 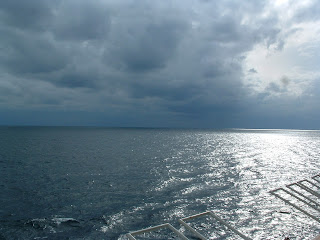 Sea and sky were the same color
We sailed out of the Black Sea on Tuesday, arriving in Piraeus sometime in the early hours of the morning Oct. 13th, Greek time.  Our cruise went far more rapidly than the calendar indicates; it doesn't seem that 12 days have passed since we were beginning the adventure to new ports of the world.

Our cruise provided many adventures, wonderful discoveries and more history than one can absorb in a single trip: we visited the lands and sailed the same seas that centuries ago were home to Romans, the Ottomans, Jason and his Argonauts, just to name a few.

The bit of history we weren't prepared for was discovering a bit of my history as we made our way to Russia.

"Excuse me. . ." a lady called out while I studied the various food choices on the Lido deck one lunchtime.  As I turned, she continued, "but, are you from Washington?. . .You are Jackie aren't you!?"

She was a bit grayer in the hair and used a cane to steady herself (a bad knee), but I recognized her instantanously:  the mother of one of my best high school buddies!  It was at their Italian home in the central Washington town where I grew up, that I first ate real homemade spaghetti, it was with her daughter I celebrated my Sweet 16th.

She and her husband were on the cruise celebrating their 58th anniversary and my good buddy - whom I hadn't seen in decades - was with them.  We renewed a friendship and shared history stories - ours - that kept us all amused and entertained during the dark and dreary days.
Posted by Jackie and Joel Smith at 5:57 AM