Waiting for Godot, the Samuel Beckett play in which two characters wait for "Godot" ranks high on the 'theatre of the absurd' list. 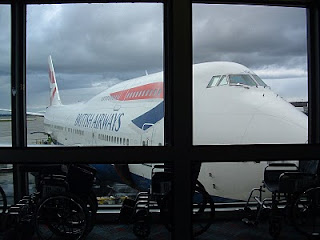 BA Flight #48 - we were on it. . ..really!
I am writing a travel sequel,  Waiting for Air Mile Credits.
Alaska Air is the producer and British Air has a starring role and we -- two Alaska Air loyalty program members --are but supporting cast members.

The storyline:  We, the supporting cast, traveled to London on April 28th on British Airlines, one of Alaska Air's partners.  We paid for our tickets so qualified for the partner portion of the actual miles flown, about 1,200 miles per person.  Alaska's web site tells a loyalty member that it may take 60 days to recieve miles in their account from a partner. . .

Our wait began.
When no credits appeared on our accounts by the end of June, I faxed copies of the boarding passes to Alaska requesting the credit.

And we waited.
After a few more weeks passed, I  updated the fax request and faxed it again..

And we waited.
Finally, I reasoned that I had faxed to the wrong number.
Of course! That had to be the answer. . . and I had a comedy in the making.
So in early August I called Alaska seeking the correct fax number.
But wait! Turns out I had been using the correct number.

A pause. . .a mystery plot was developing:
Seems a record of our flight was posted to our Alaska accounts July 3rd; BUT we won't  get credit for the miles until British Air verifies our request.
(Can't imagine anyone at British Air remembering us. . .but I had faxed copies of our boarding passes. . . .maybe they've been sent  to British Air for verification - I couldn't bring myself to ask. )

May take another three to four weeks to appear, I was told.
This weekend marked four months since our flight.
No mileage credit has appeared on our accounts.
And still we wait.
Posted by Jackie and Joel Smith at 3:06 PM