Where are we going? We don't know! 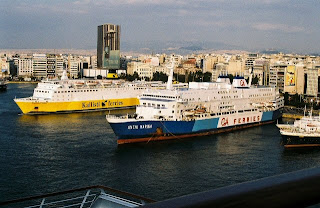 Ferries in Piraeus Harbor, Greece
The itinerary for Holland America's Westerdam is so organized that we know not only where we will go, but the hour of each departure and arrival. But for the fews days before and two weeks after the cruise we will be 'travelers' by Theroux's definition: we don't know where we are going.

That's not to say, we don't have plenty of ideas, though. For us, the trip began the minute we had booked the cruise and started researching before and after destinations - most of which we will never get to but have had a great time exploring from a distance. We are reading our aging travel guides, a few novels, warming the computer keyboard with Google Searches, filling notepads with scribbles, and twirling the world globe.

The research has tempted us with many places, yet, we still don't know where we are going. 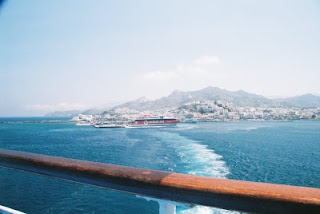 Leaving Piraeus, Greece
We will set our compass by 'where the winds blow us' within the confines of Greek ferry schedules. We just today discovered a great website for ferry schedules:  http://www.openseas.gr/

Axing a stay in Amsterdam we've gained a few extra days under the Grecian sun. The islands of Poros and Hydra, both relatively close to Piraeus, from where the Westerdam departs, would provide new scenery and adventures for the days prior to the cruise. . .It is hard to choose between the two. Joel suggests that after we arrive in Piraeus, we catch the first ferry heading to the Saronic Islands, the cluster of islands in which these two are found and stay at whichever place it reaches first.

That works for me!
Posted by Jackie and Joel Smith at 5:16 PM