Cruising Countdown and Other Contemplations

There's just something about cruising . . .for us, the excitement begins long before the blast of the ship's horn signals our departure.

We ponder where our cabin will be, what we will do at each new port of call, how few clothes we can pack and still be socially acceptible and about new friends we will make.  This trip even promises a chance to reconnect with our Florida friends whom we met on an earlier cruise - on this same ship, the Westerdam,as a matter of fact.

Our countdown to cruising has begun. . . 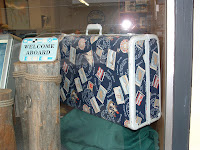 And, no, we still don't know what we are doing or where we are going during our two after-cruise weeks. Although, author Seth Stevenson has unleashed a whole new set of travel bugs upon us in his book,"Grounded - A Down to Earth Journey Around the World" (Riverhead Books Publisher, 2010) in which he writes about the trip he and his girlfriend made circumnavigating the globe without ever setting foot on an airplane.  They traveled by freighter, container ship, bus, bike, train and car on the journey that took six months to complete.

Stevenson is the writer and his girlfriend an attorney.   Hmmm. . . with a gender flip, it's the same mix as in this household. (They are probably a couple decades younger than we are, but travel bugs don't discriminate by age).

"We could do that!" we say, with a tinge of speculation.

"We should do a trip like that before we get too old to do it," our reasoning continues.

Maybe we could  test out their travel style in our two yet-to-be-determined weeks:

One option:  If we caught a ferry from Piraeus to Italy (Ancona, Bari, or Venice) after our cruise ship returned from the Black Sea, we could take a train to Rome and depart there on a repositioning cruise that would take us to Fort Lauderdale. . .it's still a bit on the pricey side for our 'find-a-deal' budget.

Or we could:  take a ferry from Civittavechia (the port city for Rome) and head to Spain. There's another repositioning cruise that leaves from Barcelona - good price, interesting routing. . .hmmmm.

Either option would give us more time on the sea ~

The more practical (probably the more economical) version:  Simply fly (sorry, Seth - we will have to be 'grounded' some other time) to Barcelona from Athens. Cheaper and quicker but doesn't kindle the 'romance of travel'.  From a practical standpoint we'd have more time for exploring Greece or Spain.

Or we could remain on course:  pondering where we want to go for a couple weeks after the Black Sea cruise. . .maybe just hop the first ferry out after we leave the ship. . .