Yakima: Fruitbowl of the Nation 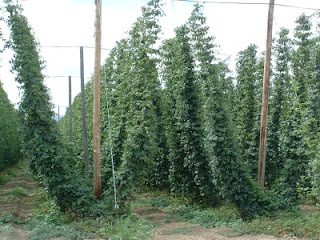 Hop Vines Yakima Valley
The rich farmlands of the Yakima Valley are blanketed with truck gardens, fruit trees, vineyards and hop vines.  I grew up in this agricultural area in the center of Washington State. And, as a child, I loved those colorful painted signs along the roadway that proudly proclaimed the area to be the:  "Fruitbowl of the Nation".

Now tourist signs with a single sophisticated looking wineglass herald the pleasures to be found at wineries and vineyards that proliferate the valley. Don't get me wrong; we love those wineries, but there's a lot more to the valley than wine grapes. 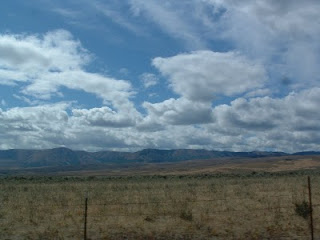 We traveled earlier this week through small towns named Toppenish and White Swan and through a portion of the Yakama Indian Reservation. Often we had the backroads to ourselves; only passing a tractor lumbering along with a spray rig in tow. Cultivated fields gave way to sage-brush covered open lands bordered with barbed wire fences. Then, unexpectedly, another irrigated stretch of land would appear. 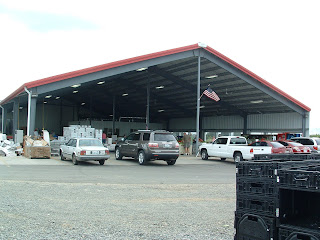 Imperial's Garden, Wapato WA
We make this August trip annually from our western Washington home primarily to visit a favorite produce 'stand' called Imperial's Garden, (Lateral A, Wapato, WA.).   This year we found the 'stand' in much larger digs. Semi-trucks were being filled with just-out-of-the field produce boxes while people like us loaded our cars at the front of the building - also by the box loads.

Shopping options abound as painted wood signs direct those traveling along Lateral A, the best road to follow through this agricultural area, to other smaller, family-owned seasonal markets, some offering fruit, some produce and some a mixture of both. We visited many . . .tucking just a few more peaches and nectarines into the car. 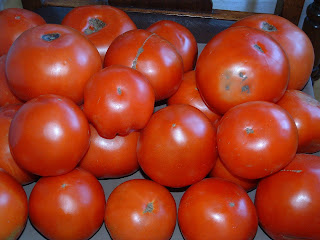 Just-picked canning tomatoes
We've traveled to some fabulous places in the world. But when driving through the Yakima Valley with the car windows open, savoring the intoxicating scents from the mint fields or fresh mown hay. . . or tasting that just-picked peach or tomato  -- I can't think of any other place I'd rather be during harvest season than back home in the "Fruitbowl of the Nation."
Posted by Jackie and Joel Smith at 5:17 PM