"Black Sea Medley" is the name given our 12-day cruise by Holland America . We'll be joining two thousand others on board its Westerdam setting out to explore ancient cities this fall.  The cities -- some we'd never thought of visiting before -- now tease our senses of adventure with images of exotic intrigue and tempt with explorations that will intoxicate our senses with new smells, sights, sounds and tastes.

We will set sail from Piraeus; the bustling port city near Athens. 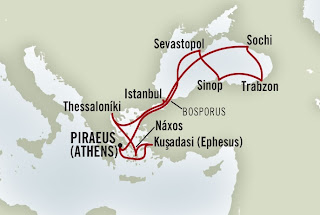 We'll then travel to:
* Kusadasi, Turkey, gateway to the ancient city of Ephesus the once bustling seaport which might be called the religious center of early Christianity.
* Volos, Greece, at the foot of Mt. Pelion and featured in much Greek mythology.
* Thessaloniki, Greece, while the cruise line lists this as Greece's 2nd largest economic center (industry and commercial) I prefer to think of it as described in the Aug/Sept 2010 Saveur Magazine: "Greece's culinary capital,with an eclectic cuisine reflecting the proximity of Bulgaria and the other Balkan states (due North) and Turkey (to the East) as well as the city's key position on well-established trade routes between the Middle East and Europe."  Far more intriguing to me than 'industrial center'.
* Istanbul, Turkey, this magical city we visited for just a day on a 2008 cruise, was once called Byzantium then Constantinople. We arrive at noon one day and don't leave until nearly midnight the next. . .how many meals can we manage to eat during our time on shore? 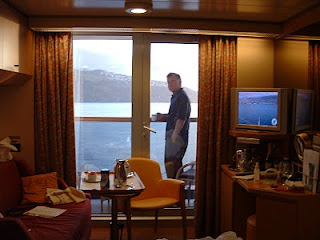 Morning coffee delivered to the room
* A day at Sea (to regroup the senses and diet after Istanbul) and not just any Sea Day as we will sail the Bosphorus and begin criss-crossing The Black Sea with stops at:
* Sochi, Russia with its Caucasus Mountains backdrop, is where the 2014 Winter Olympics will take place.
* Trabzon, Turkey - where the Byzantine and Ottoman eras are reflected in architecture throughout the town.
* Sinop, Turkey - offering one of Turkey's most beautiful natural harbors we are told, this was the birthplace of the cynic philosopher Diogenes.
*Sevastopol, Ukraine - we will be among the more than 500,000 visitors to this city each year and will see how many of its 1,800 historic monuments and memorials we can see during our stop.
* A Day at Sea en route to where we began:
* Piraeus, Greece

Next post we'll ponder what to do in the days before and after the cruise.
Posted by Jackie and Joel Smith at 7:07 PM