We did it! After talking for months about this multi-generational 'girls trip' to Portland, Oregon, a trio of female travelers set out last week to visit a fourth who lives in the "City of Roses". 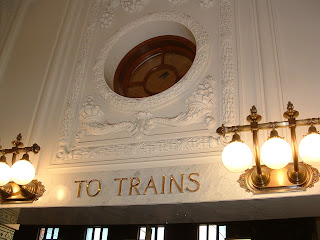 King Street Station, Seattle
As many of my trips do, we began aboard Metro's 255 bus that picked us up across the street from my Kirkland home and dropped us an easy walk from Seattle's King Street Station; home to both Amtrak and SoundTansit trains. Restoration work continues at the stately old station that opened in 1906 with a clock tower patterned after Venice's Campanile di San Marco. When finished, it will be one of Seattle's showplaces - it is already looking good.

On the southbound journey we rode Amtrak's Coast Starlight which carries passengers as far as Los Angeles' Union Station.  My return trip the following day was on Amtrak's Cascades that runs between Eugene and Vancouver, B.C. 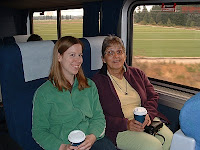 My traveling companions (pictured on the left) and I each had round-trip coach class tickets ($81.90 per person with a AAA-Club of Washington discount) that got us comfortable seats on the upper level of the double-decker train car. We had large windows, and ample leg room with both leg and feet rests. The seats would have been perfect but for the two undisciplined little boys who sat with their mom behind us. Remember the movie, "Throw Mama from the Train"?
It comes to mind. . . 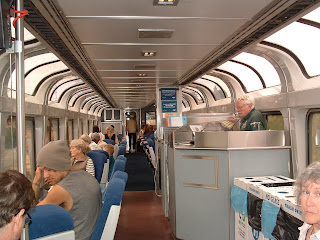 Trail & Rail Ranger on board
A highlight of the 3-hour and 45 minute ride was learning about Amtrak's Trail & Rail Program, a partnership with the National Park Service that puts volunteer rangers on board to explain the natural and cultural sites along various U.S. routes.  Two rangers on our train had notebooks full of information that they used when making announcements along the way in the Sightseer Lounge Car, pictured above.

This Trail & Rail program operates on various Amtrak routes from spring until fall.  For instance, the rangers told us  volunteer rangers can also be found on Amtrak's Empire Builder between Shelby, Montana and Seattle.

The Portland adventures of the Female Foursome  -- two over-50-somethings and the two under-40-somethings -- continue in the next post.. . .
Posted by Jackie and Joel Smith at 1:43 PM