The fellow from California that we met in Madrid said, "Wow! You are taking a real grand tour aren't you?" when we told him of our travels.

And I hadn't even told him that was what I'd been calling this trip long before we left home. Ever since reading about Europe’s “Grand Tours” I have always thought what fun it would be to have taken one. And since it's never too late, I stretched the definition a bit and named our spring trip our “Grand Tour”  although originally. . . 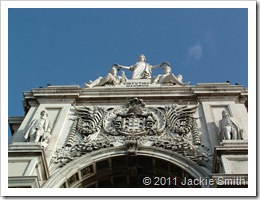 Those Grand Tours. . .
. . .served as what you might call an educational ‘rite of passage’ for young, upper-class, European men, that really caught on in the 1660’s and reached its crescendo in the 1840’s or so, after the introduction of large-scale rail travel.

(If you travel, you recognize the name Thomas Cook, don’t you? We flew one of their flights last year and they have money exchanges all over the place. Well, it got his start back in Grand Tour days with his then popular “Cook’s Tours”.)

The tour gave the young aristocrats an opportunity to learn about cultural legacies, view great works of art, listen to music. The tours could last for months, even years. They were not pilgrimages of scholarly or religious sorts, simply opportunities for intellectual and cultural growth. 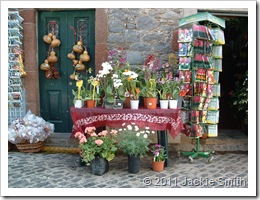 . . .while certainly no where as long as those of olde, we have had wonderful opportunities to expand our cultural and historical knowledge.  From the on-board lecture series (our favorite speaker was English writer Nigel West) and the Corning Glass Museum demonstrations that Celebrity offered, to Madrid where we lived at the point of its Golden Triangle of the Prado Museum, Thyssen-Bornemisza Museum, and the Centro de Arte  Reina Sofia, we have had some great opportunities to pursue that favorite US public school phrase: life-long learning.

We’re concluding our Grand Tour with our brief immersion in London history and culture (and at least a couple trips to The British Museum), before spending a final night in Paris where we plan to educate our palates with French cuisine, and expand our knowledge of wine, perhaps a bit of champagne, and a lot of Sancerre, the favorite white wine of ours from France’s Loire Valley.
Posted by Jackie and Joel Smith at 9:25 AM