A Sea foam and Sapphire Saturday 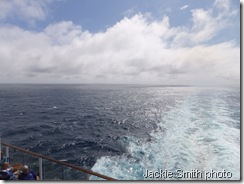 Being on the sea is the selling point for us on transatlantic cruises; days of endless sea foam blanketing sapphire water with lace coverings. That, and then not having anything that requires our attention beyond those ever-changing patterns, well, of course there are always the decisions about entertainment, activities and eating, but more on those later.

(And even those stormy slate-gray waves we’ve had for three days have  been interesting to watch). 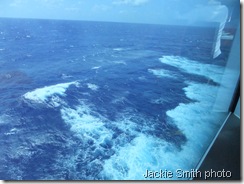 If we thought ‘sea days’ had gone too fast on previous crossings on Holland America ships, they were nothing compared to the speed this week has zipped away. Here we are on our sixth and final day of crossing the Atlantic. The captain tells us we are now 2,535 nautical miles fom Florida and 336 nautical miles from our first port of call, Ponta Delgada, the capital of  Sao Miguel, the largest island of the mid-Atlantic Azores and the greenest of them.

Legend has it that the Azores are that of the lost city of Atlantis (of course, we have heard that in Greece and just yesterday heard a lecture in which we learned theorists think Atlantis might be in the Bermuda Triangle somewhere.)
Posted by Jackie and Joel Smith at 5:14 AM