We’ve arrived in Lisbon, the capital of Portugal after traveling some six miles up the River Tagus from the Atlantic Ocean to reach this, the oldest capital city of Europe. 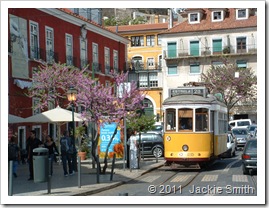 We are docked in its expansive bay, called the Mar da Palha” or “Sea of Straw”.  We stopped here a couple years ago on a repositioning cruise so plan to re-visit some of our favorites today. Or we may catch the local train and head to Estoril or Cascais, nearby cities and within an easy day trip.
We loved much about Lisbon on our previous stop especially the clanking trolley cars that clattered their way up to the Alfama, the oldest part of the city, located on the sloping hills below the Castelo de Sao Jorge (St. George’s Castle) on a hilltop in the 12th century A.D. – on the same place they believe that Phoenician’s established themselves around 1200 B.C.
Phoenicians  were followed by a parade of ‘occupants” including the Greeks, Carthaginians, Romans, Visigoths, Moors until finally in 1147 A.D. it was conquered by the guy who would become the first King of Portugal, Dom Afonso Henriques. 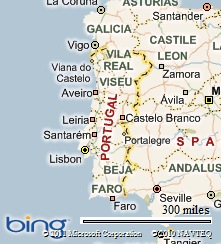 Whereever we end up today, we'll be strolling wide, tree-lined (in places) avenues, many paved with mosaics making them sprawling works of art. And we plan to sip coffee at one of the many cafes that frame those streets.
Posted by Jackie and Joel Smith at 11:45 PM