A Novel Destination: "The Writer is Here Now. . ."

A high point of our travels is seeking out  'novel destinations'; those places that come to life for us as result of some fictional story set in some faraway place that peaks our curiosity enough to go there. Such was the case last year in Crete with Zorba's beach in Zorba, the Greek and Spinalonga in The Island.

This time it was Crete that led us to new novels. . .or, I should  say, to the writer of those novels.

It was during a lazy afternoon stroll along Loutro's waterfront promenade -- a walkway that bi-sects the restaurants ringing its crescent-shaped harbor -- that we noticed the poster at Taverna Pavlos announcing a series of books 'now for sale on Amazon.com.'  As we paused to read it, Pavlos (Paul) the owner, called out to us, "The writer is here now," nodding toward the rooms above the cafe. "He will be here tonight at dinner."
And it was after dinner that night that we met British novelist Bill Kitson and his wife, Val.  Bill, a retired executive from the world of finance, who keeps you laughing or groaning with his rapid-fire one-liners, writes about murders; murders solved by the character he has created, Mike Nash.  Three books are published and more are on the way. 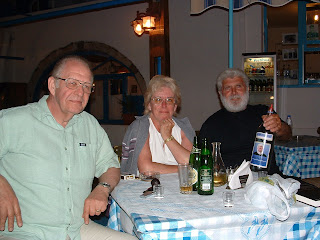 We continued our laugh-filled conversation the following evening, again at Taverna Pavlos, over after-dinner glasses of raki. Raki is Crete's rather strong beverage sipped in small amounts following a meal. Pavlos has a friend who distills the stuff and bottles it for the restaurant - look close and you'll see the label features Pavlos.

Upon learning we were from the Seattle area, Bill told us his second novel, Chosen, opens with a fictitious article from The Seattle Times that provides the plot's hook.  No, he's never been to Seattle, but he loved the movie, "Sleepless in Seattle."  We've stayed in touch with the Kitson's since we met and we plan to start reading Bill's books upon our return home. . .for those who want to take a look at them, I've added them to the Amazon carousel on the right-hand side of our blog's home page.
Posted by Jackie and Joel Smith at 7:05 PM