“So, where do you think we are?” I asked The Scout.
“I guess we are where ever we are!” he responded. 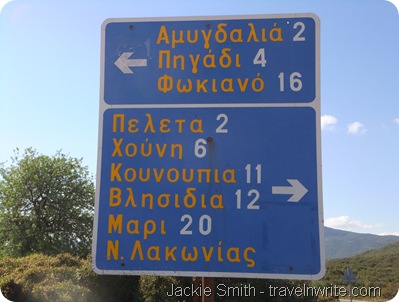 That Winnie-the-Pooh-like conversation is how we’ve sounded since leaving George and Vasiliki’s place and setting out to explore the Peloponnese without set destinations or reservations.

We began by heading high up into the mountains following a route that took us south along the eastern coast of the eastern finger of  the Peloponnese. We wound our way across, up and down the high plains, dotted with small villages.

It didn’t take long to realize that many of the villages don’t have signs to tell us their names and  when one of the few road signs came along it was written in Greek
.

“That goes left, I think we need to go right,” The Scout, and The Driver would say. Or, “There’s the sea. That’s the way we want to go.”

On that first day we went south then crossed ‘the finger’ and went north, looping our way into the ‘middle finger’ or The Mani – the place we planned to spend most of our time. 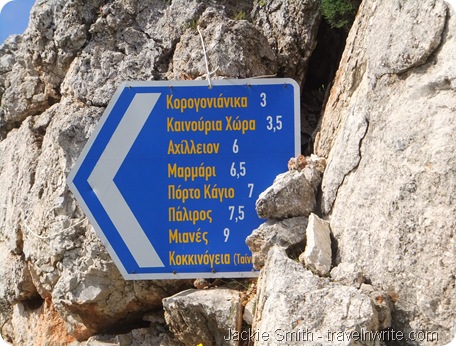 And ultimately we found a town large enough to buy a map written in Greek so that we could match the letters on the map to what we saw on the signs.  It worked perfectly!  We know what this sign is pointed to now. 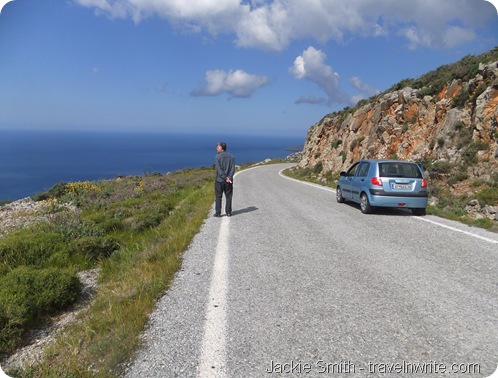 We’ve been heading north up the western coast of The Mani for the last two days.  Often not passing another car for significant periods of time. The art of slow travel, you might say as we’ve stopped to admire the views along the way.


We decided to stop at the small fishing village suggested to us by  Jeff Siger, our writer friend from Mykonos.  We planned to have coffee there and continue north. . . 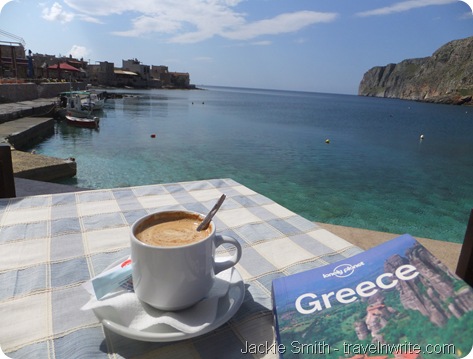 Not so fast . . .instead we rented a room above the cafe – it cost us only 30 euros.  And we’ve both agreed this may well be one of the most beautiful places we’ve ever visited.  One night wasn’t enough, and we will definitely be returning to this place. I'll tell you more about it soon. 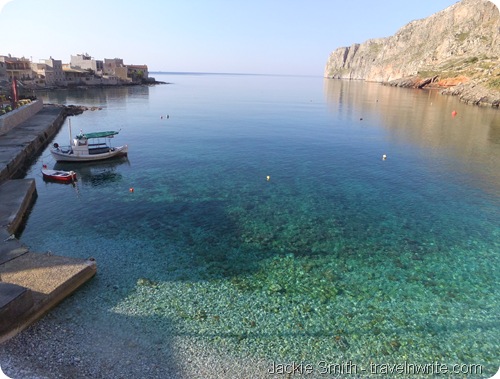 That’s it for this update from Greece.  And I think it is Travel Photo Thursday so head over to Budget Travelers Sandbox for more photos. And if you are thinking we should have had GPS, forget that idea.  The area is so remote there is nothing to connect to (we tried it using our Lloyd, the Droid.)  As wi-fi connection allows I will keep you posted about our whereabouts. . .
Posted by Jackie and Joel Smith at 5:31 AM