Sometimes the people you meet when you  travel warm your heart – sometimes they not only warm it, they expand it as well.

Such was Maria, owner of  the wonderful hotel, Les Sirenes, attached to her equally wonderful seafront restaurant, Harilaos (pictured below). 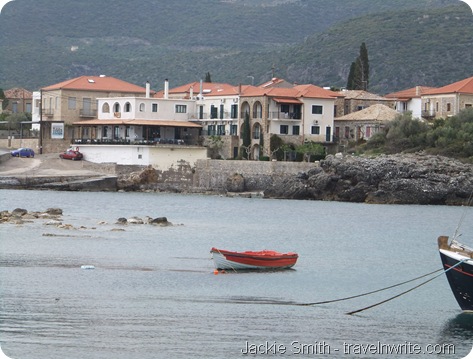 We’d not planned to stay at Maria’s when we stopped for a quick look around the town of Kardamyli. We were considering her restaurant as a place we would likely return for dinner one night during our time in the area.

“Where you from?” she asked as we entered the restaurant and she approached me.

Seattle, we responded as Maria, by then, had reached me; cupped my chin with her hand and patted both cheeks –  then wrapped me up in a hug.

We decided to look at a room. . .and not long after, decided to stay as long as we could. 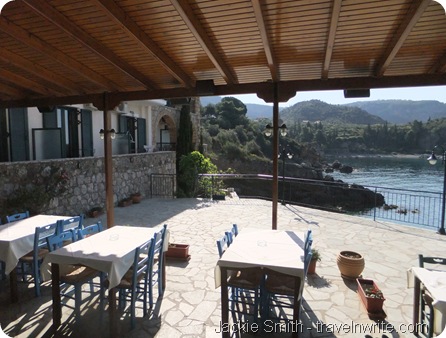 While showing us the room, Maria asked our  names.
“Jackie,” I said.
“Jackie O!” she proclaimed, “just like Onassis.”

Joel was a more difficult one for her, so The Scout explained “like the singer Billie Joel”.  Ahh, but Maria version was 'Billie Bo'. 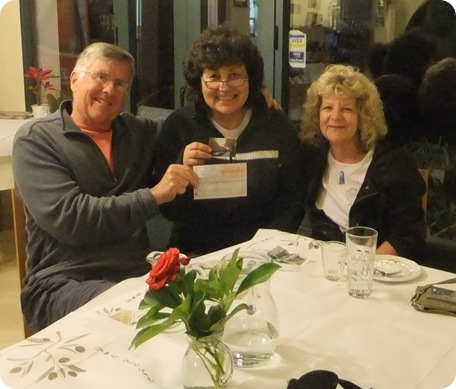 “Jackie O. and Billie Bo,” she named us on the spot and that is what we were called during the three delightful nights we spent at her place.

When Joel  asked if she needed a credit card she wrapped her arms around him in a big bear hug and kissed first his left, then his right cheek.

Maria is simply like that, we quickly learned.  She greeted us each day with hugs and kisses.  As we finished dinner each evening, she walked us to the door and hugged and planted a goodnight kiss on each of our cheeks.
She was at church when we left Sunday morning to continue our explorations in the Peloponnese.  It was good we didn’t see her to say goodbye. I know I would have cried. 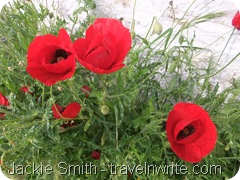 And we’ve learned that in Greece if you don’t say goodbye, it means you will return one day.

In Maria's case, I certainly hope so!
Posted by Jackie and Joel Smith at 7:24 AM