The Rock of Gibraltar: A Gem of a Substitute!

My one regret of our Spanish travels was not having enough time during our Costa del Sol stay to visit Gibraltar. We’d decided it was just a bit too far down the road to tackle. . . not to mention the guidebook’s warning about length of time to cross the border from Spain into United Kingdom territory.

So when our captain announced  Tuesday evening that a Portuguese planned strike  would prevent us from going to Funchal, Madeira and we would be stopping in Gibraltar instead, I did a happy dance around the cabin.

American writer Paul Theroux, in his Pillars of Hercules says, “Gibraltar is just a conspicuous pile of limestone, to which distance adds enchantment.”

Maybe that has always been the case with me.  I’ve been enchanted by the place because it was so far from my world. . .I remember being introduced to ‘the rock’ in those Prudential Insurance advertisements during my childhood and it seemed light years from anything I’d ever visit. Of course, I’ve always wanted to see those famous apes who inhabit it. . .whatever the case, I’ve always loved the rock.

I was so excited about our visit that I was out on the deck by 6:30 a.m. – a time still so dark that the Big Dipper looked as if it were  sitting on our railing. The waterway was filled with brightly lit ferries and freighters. 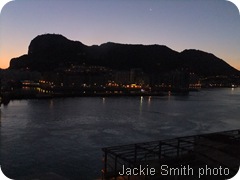 Our ship, already creeping in at a snail’s pace began a gradual turn to the right just as daylight was arriving and as we turned,  the The Rock of Gibraltar came into view.

It was magic, I tell you, pure, unadulterated travel magic! 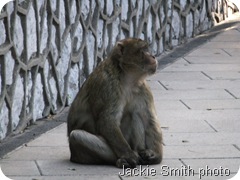 We walked nearly 10 miles during our time in Gibraltar. We traveled the length of the town’s Main Street, with its colorful Christmas decorations and stores offering every product imaginable.  We were headed to the Botanical Garden and considering a ride up the cable car to see the apes when all of a sudden the little buggers appeared right on the street in front of us – saving us the time and effort to go up to visit them. 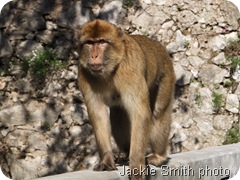 The story  is that these apes,  Barbary macaques, were brought here by the Berbers from North Africa in the 1700’s. They were pets.

Spain ceded Gibraltar to Great Britain in the 1700’s and Sir Winston Churchill is quoted as saying of them, “As long as the apes remain, so will the British.”  It seems to be true as the apes continue to entertain tourists in this place that continues to be a British colony.

Leaving Gibraltar – sailing between The Pillars of Hercules at sunset– one on north Africa’s coast, the other being Gibraltar was as magical as our arrival.  I am already thinking I must return. 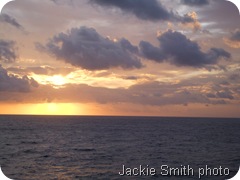 A Navigational Note:  It is Saturday morning and we’ve been on the ship for nearly a week.  We left Tenerife, in the Canary Islands last night and that was the last land we will see until next Saturday when we arrive in Fort Lauderdale, having crossed some 3,400+ nautical miles of ocean.  We’ve been advised we will have ‘slow or no’ internet access during the crossing at times, so I’ll write more when possible.

The sea is smooth,  the temperatures a most welcome 73-degrees.  Today reminds us of why we love transatlantic cruises.  I took this photo this morning while having morning coffee on our deck – the sea and sunrise couldn’t have been better
Posted by Jackie and Joel Smith at 4:29 AM