The Snap
Those of you following along on our Spanish travels last heard from us saying we were off to meet friends who were flying to Malaga then drive to our current location, Marriott’s Marbella Vacation Club.

Sounded pretty simple when I wrote it. . .but as we’ve learned with travel, not every experience is what we think it will be.

The plans were determined weeks ago:  we’d meet at the Avis Rental Car counter in the Malaga airport after they had collected their bags.  We’d gone so far to find a map of the airport on line and located the rental counter – before leaving Kirkland.

A friend in Kirkland had flown into the airport a couple years ago and told us it had been a snap. So. . .
. . .we spent the night in Malaga and caught the high speed Metro train out to the airport. A snap.

The Snafu
The Avis rental car counter we were first told was downstairs in the secure arrivals area - a place accessed only by those with airline boarding passes; then we were told it was in the garage area with the cars.  Our friends’ flight was a bit delayed so we decided to wait outside the secure arrival gate and catch them as they came through and all four would find the rental car.

Their side of the story is that just before that gate where we were waiting (and where we'd been told every arriving passenger walks through,  there was a huge sign saying “Go no further, rental cars downstairs” so we waited outside the gate and they waited downstairs. And we waited. . .and waited.

Finally I dug out the directions for using our cell phone and successfully used my Seattle Verizon phone (which was programmed to make international calls) to call an English cell phone from Spain.  Our friends answered and said they were at the rental car kiosk – but we thought they were at the one in the garage. . .Avis was the last rental car agency in the garage so think of a couple of football fields to access it.  As we set off to where we thought they were, we chatted again by phone.

And then the phone quit working.  I would dial their number and the phone showed, “No Access Emergency Calls Only”.  They could call us, but got voice mail.  We were still football fields apart.

Joel rented the car and began putting our bags in it only to realize it was too small for our bags, let alone for two more people and their bags.

Thus began an hour of switching cars, and setting off in search of our friends (this is a large airport with three terminals); they’d decided to search for us and we had the Avis counter clerk on alert for ‘friends’.  Our friend got to the counter we’d been at minutes after we set off searching for him. . .it was just luck that we saw each other across the crowded garage as he was returning to his starting point.

A few hours later than planned we set off in our larger car. . .well, make that truck.  (We’ve seen several bread and laundry delivery vans that look just like us): 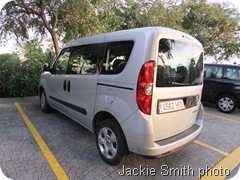