“So, what about Osuna?” I asked Joel as we surfed the Web prior to this trip. 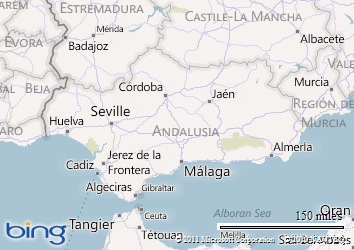 I was looking at a web site called Inns of Spain when a photo similar to the one below made me suggest Osuna: 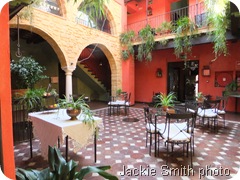 The photo is of the lobby/courtyard of La Casona de Calderon – a 17th Century noble family’s home in Osuna that has been converted into a hotel with 15-en suite guestrooms and a restaurant. A visit to the hotel's website and I knew I wanted to stay here even though we knew nothing - then - about the town in which it was located.

The rates for this time of year were so reasonable that we decided to splurge and booked ourselves a Junior Suite at 270E for three nights.

Elena Calderon, along with her sister Aurora, three years ago opened the hotel in this mansion that has passed through generations of their family. She greeted us and showed us to our ‘room’. When Joel said, “This is a junior suite?!” she answered that we'd in fact been upgraded to the suite – we'd call it a casita, a small house!

So here is our ‘suite from the outside (yes, the whole thing is ours)’: 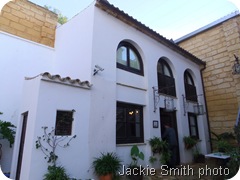 And then you step inside (I am at the table writing this post): 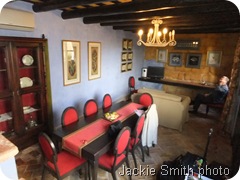 An open stairway leads  to our bedroom and master bath (there is a second tiny half-bath under the stairs. 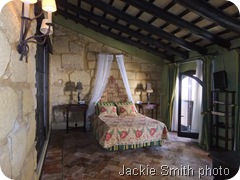 We’ve peeked at the regular rooms and and the junior suites and they are equally as well decorated – just smaller. And really this is far more room than two people need but our host's generosity is appreciated. The hotel's common areas are filled with collectible art; it is a museum hotel that has given us a taste of the real Spain. It is everything I'd hoped for and more.

Our days begin in the covered courtyard  - we dine on a European-style breakfast of cold cuts, cheese, fruit, pan and locally made olive oil, which is included in the price of the room.  We’ve ended each day there as well sipping wine and watching the moon play hide and seek in the clouds above us.

No doubt about it, we've found an Andalucian  treasure.