Our Cruise Director has toured the world in musical theatre and since 2004 she’s been a part of the cruising world as both an entertainer and a Cruise Director.

Cruise Directors  (for those not familiar with this form of travel) are the folks in charge of entertainment and activities; the things that keep passengers busy on long days at sea such as those we are now enjoying as we cross the Atlantic Ocean on our Celebrity Constellation (“Connie”). 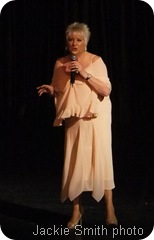 Cruise Directors are the ones who appear in elegant dress to announce the evening’s theatre entertainment. (as is Sue in this photo). They appear on the ship’s television channel to tell you about special events and activities.

They are, you might say, the cheerleaders; the persons that  passengers are sure to  remember.

Although we’ve now sailed on a number of cruises, I’ve never met a cruise director until this sailing.  Sue is one of the folks on board that Celebrity had arranged for me to interview while on the cruise.

And I’ll tell you about that chat in the next post, but now  I want to tell you about my first meeting with Sue – last week, long before the ‘official’ interview took place.

We met in one of the women’s bathrooms on the day after we’d sailed from Barcelona.

I had been outside the bathroom as she whipped past me, high heels clicking, with heavy rubber gloves on her hands carrying a bottle of cleaner and sponges. There was no one else around – I’d been waiting for Joel to return from the men’s room.

Not quite believing what I’d seen, I followed her inside and there found her scrubbing a toilet.
“Aren’t you are Cruise Director?” I asked (as any good reporter would do). 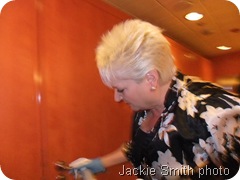 “Yes, luv, I am,” she replied in her heavy English accent, without missing a swipe.

“And, uh, you are cleaning toilets,” I somewhat stupidly added.

“Yes, luv, I am,” she replied. And then she added that our staff had been working so hard to eradicate the gastrointestinal virus that had struck during the last cruise (see my earlier post) that I could rest assured I was on the cleanest ship on the ocean. 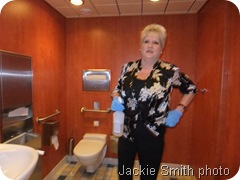 I reminded her of that meeting when we sat down for the formal interview yesterday. She was quick to clarify she hadn’t been doing it for notoriety. (I knew that as there had been no one else had been around other than another staff member who was also cleaning the restroom.)

“If I don’t do it, I can’t expect my team to do it,” she explained, noting that the Herculean task of sanitizing the ship on that Sunday had required that musicians, entertainers and revenue partners all join in on the cleaning that continued for the first couple of days of the cruise.

“This is a family and this is our house,” she said of the ship and its crew, “We want to keep it safe and clean for all of us.”

So I’ll tell you more about Sue in the next post, but I can tell you that I knew after our first chance meeting, she’s a cruise director I won’t soon forget.
Posted by Jackie and Joel Smith at 5:19 AM