“A donde va?,” asked the rotund bus driver as I stood at the Seville bus station. “Osuna a  la once (own-say).” I answered. 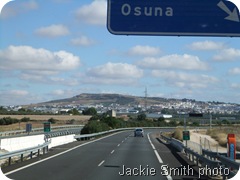 And 30 minutes later at precisely 11 a.m. we were off on our second phase of this Andalucian Adventure.
Osuna is located an hour and a half from Seville, nestled into the Sierra Sur foothills; an agricultural and  university-town. 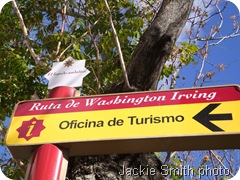 Signs  remind visitors that we are in one of the towns on “La Ruta de Washington Irving.” (Irving’s “Tales of the Alhambra” is set in Granada but  begins with his trip from Seville to Granada through the Andalucian countryside.)

We came here not for the town, but for the hotel that called out to us during an internet search back home several months ago. More on the hotel in the next post. . .today is about the town; a place quite popular as a base for hunting and fishing trips in the surrounding areas.

Although Lonely Planet’s “Spain” guidebook devoted a portion of a page to the town it didn’t prepare us for the enchantments that it held.  Enchantments, remind me of Don Quixote’s travels – so it seems fitting that we are under their spell in a hotel that is on Plaza Cervantes, named for the author of the fictional character.

The first thing we noticed was that prices here are so incredibly inexpensive that we pause each time a bill is presented. . .”It can’t be THAT cheap, can it?” we ask ourselves.  (For example, two caffes con leche (cafe lattes) with a large glass of fresh squeezed orange juice was 3.5E this morning - $5.) 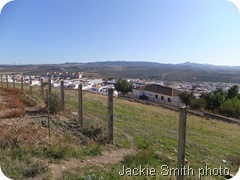 We’ve wandered cobble-stone streets racking up double digit miles on the pedometer passing blocks of mansions dating back to the 1700’s; a church built in the 1500’s, a university with centuries of history. Plazas, fountains, squares; gathering places for young and old.

And then there’s the olive oil factories that fill the air with the smell of olives and olive oil. Those, too, will be written about later.

And then there’s  the Roman ruins. . . We are headed out to see them this afternoon – obviously way too much to see and do!

Note:  We’ve enjoyed using our Spanish – limited as it is – but it wouldn’t be necessary to speak the language to visit this area.

The photos in order: from the bus arriving in Osuna, one of the many “Ruta” signs in town and a view from the university parking lot out over town – the large building in the distance is a hospital.
Posted by Jackie and Joel Smith at 5:01 AM