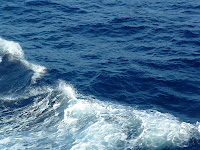 I've said before, we think the research is half the fun of the trip, so in preparation of our upcoming trip to Hawaii, we've dug out some of our favorite novels to get us thinking about sun, sand, sea and swaying palm trees. Among our favorite reads: Stories of Hawaii by Jack London, a collection of short stories he wrote as result of his five-month stay in 1907 and subsequent trips in 1915 and 1916.
Another favorite that kept us laughing is Hotel Honolulu by Paul Theroux -- this is one you either love or hate, as this noted writer tells the tale of a down-and-out writer who becomes manager of the fictional Hotel Honolulu (actually it reminds us both of the places we stayed decades ago just out of college).
Last year a wise publisher began re-issuing the six books that make up Earl Derr Biggers' Charlie Chan mystery series, about the charming Honolulu detective who quickly won our hearts after reading the first book. Trying to make them last as long as possible, we are just reading our third, this one, "The Black Camel" - which was made into a movie in 1931.
Honolulu Stories, Two Centuries of Writing, a tome of more than 1,000 pages, edited by Gavan Daws and Bennett Hymer, is both a history book and a collection of beautiful poetry, lyrics, and stories. We found it at a Costco in Honolulu and debated the wisdom of buying such a bulky, weighty book. . .it is such a treasure we haven't regretted succumbing to its call.
Posted by Jackie and Joel Smith at 4:16 PM