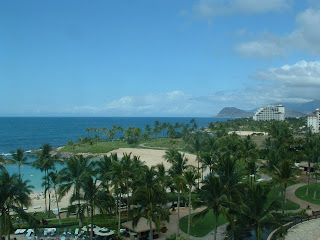 In the Hawaiian language ohana means family. When we bought a week at Marriott's Vacation Club at Ko Olina on the northwestern shore of Oahu two years ago we were told we were now members of the "Marriott ohana" and that we had just purchased 'a piece of paradise'. Since I come from the world of public relations I had to agree that both sound better than saying we bought a timeshare.

On Friday we began our two-week stay at Ko Olina, which they tell us means 'place of joy' in Hawaiian. We were greeted at check-in by clerks who warmly welcomed us 'home'. So here we are at home in Hawaii with our fellow Marriott family members for the next two weeks.

Because the piece of paradise we purchased is what they call a two-bedroom lock off, we are able to stay two weeks for basically the price of one. This first week we are in the smaller guest room side that has a couch, chair, coffee table and studio sized kitchen and king bed and small deck; next week we move to the bigger unit which has a full bedroom, living and dining room and large kitchen with en suite washer and dryer.

This photo is from our deck in the Hale Nai'a (dolphin in Hawaiian) building that was completed last year. In fact only the wing we are in is yet open as result of the economic downturn in tourism here. The other wing is now scheduled to open next year. There are now three buildings as part of the Marriott complex and someday there are plans for a fourth.

Our view is straight out over the lagoon of the same name as the building and the Pacific Ocean. We also have a great view of the JW Marriott (in the distance in this photo). So our days start on the deck watching the sun turn the water from its dawn silvers to the deep blues of mid-day and we watch the day come to a close from the same viewpoint. And that bit about owning 'a piece of paradise' isn't p.r. spin, it really is paradise.
Posted by Jackie and Joel Smith at 6:17 PM