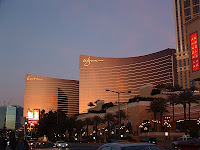 We are simply having a 'bowl' in Las Vegas! Football fans everywhere need to keep this place in mind during football 'bowl' week. We've been here for the Fiesta, Orange, and GMAC Bowls. We watched the Fiesta Bowl in the comfort of the Sports Book bar at the Wynn (where we are staying). To one side of us, there two Longhorn fans ("Hook 'em Horns") cheering for TCU and on the other grandparents of a TCU student. Three big screen tvs, and some 30 flat screens wallpapered the walls. Great seats, great conversation and a great win. . .for us: Boise State Broncos won the game. (Yes, another plus, is that you can bet on the games - and yes, we bet on the Broncos.)
Last night we watched the Orange Bowl at First, a restaurant and bar at the Palazzo, just across Sands Avenue from Wynn. We have also had a chance to visit with some of the dozens of Alabama Crimson Tide and Texas Longhorn fans who are working their way toward tomorrow's Bowl Championship game being played in the Rose Bowl, Pasedena. One of the 'Tide' fans told us he was among 20 on a small fan bus heading that direction tomorrow and he'd heard another five large buses would be leaving here as well.
And when not watching football? 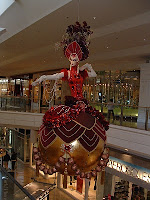 Well there is the Fashion Show Mall just across Las Vegas Blvd. Pedestrian overhead walkways make it a snap to get across the streets that are always a buzz with tour buses, cars and taxis.
And then of course, in 60-degree sunshine, we can't let the afternoons get past without a bit of time sunning at poolside. 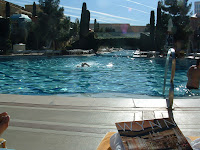 Posted by Jackie and Joel Smith at 4:37 PM