While on Spain’s Costa del Sol we’ve headed to the beach each day the weather has allowed for such an outing.  Sunday morning we decided not to be deterred by the threatening clouds and headed out for a walk on this stretch of beach with sand so fine it’s like walking on sugar crystals.   We passed but a dozen others along the way.

Not far from our place we happened upon an 18th Century torre, or tower; once a bastion of security for this stretch of coastline. Its doors were locked so couldn’t explore its interior but gun holes visible in the exterior stonework set our imaginations soaring. What might have been the battles fought there? 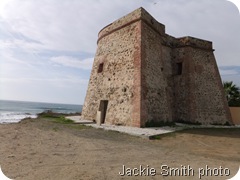 A bit further down the deserted beach we happened upon another sign of the times, this one a bit more modern but none the less it let the imaginations soar: 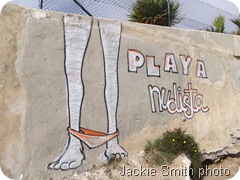 For other travel photos, head to Budget Traveler’s Sandbox, the creator of Travel Photo Thursday.
Posted by Jackie and Joel Smith at 10:22 PM