We begin the final phase of this Spanish Adventure tomorrow (Sunday) when we board our Celebrity Constellation cruise ship here in Barcelona bound for Ft. Lauderdale.

We’ve already vowed to return to Andalucia, the area where we spent most of this trip; there are far too many towns like tiny Osuna just waiting to be discovered by us.  We’ll likely not return to the Costa del Sol as it was a bit too touristy for our travel tastes. It was a nice contrast though to the interior towns of Seville and Osuna. 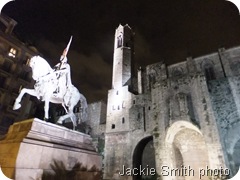 And speaking of contrasts, we are now in Barcelona, a metropolis of 1.6 million people. Our hotel is in the Barri Gotic, or Gothic Quarter.  We’ve strolled through the area on previous cruise ship stops, but as is our only complaint with such stops, they usually don’t allow us to see a city at night. 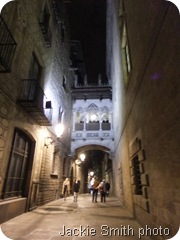 So we are soaking up the ambiance of the night as we stroll our ‘neighborhood’ streets  - a warren of medieval twists and turns past buildings that date back to the 15th Century.

It is interesting to be back in a big city especially one that is known for pickpockets and theft.  Our Hotel Colon, provided a security checklist for us upon arrival that included tips for street safety – jewelry, money and all non-essentials are left in the room safe each time we venture out – night or day. 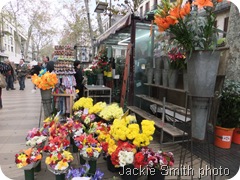 And days have been spent strolling the famous pedestrian street, La Rambla, where the flower stalls were a bright contrast to a rather gray morning yesterday.
La Rambla gets its name from a seasonal stream that once ran here; rather hard to imagine this busy walkway was once  a stream. 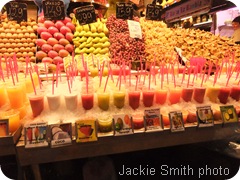 The only thing that might have been brighter were the fruit displays inside the Mercat de la Boqueria, the sprawling municipal market just off La Rambla, that is a highlight of a trip to Barcelona.

We’ll ease into leaving Spain as we will visit Alicante and Malaga before we head  for the Atlantic Ocean.  That is a good thing. . .it will be hard to leave this fascinating country.
Posted by Jackie and Joel Smith at 5:51 AM