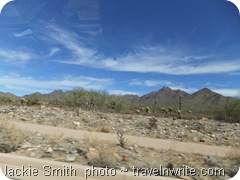 June 2012 arrived Friday in Phoenix/Scottsdale with a sizzle:  113-degrees was the prediction ~ it felt hotter. Like a sucker-punch-to-the-stomach-hot.

We like hot, dry climates. And that is good, because that’s what we’ve had since arriving in the Valley of the Sun.

Fellow travel blogger, Dick Jordan, (whose Tales Told From the Road is worth a visit) reminded us that there’s a reason for the saying, “Only Mad Dogs and Englishmen travel to ‘Arid Zona’ between baseball’s spring training camps and Thanksgiving” and that reason is the weather.

We arrived during a ‘cold spell’ by locals’ standards. It was 89-degrees. The heat kept rising until Friday and is now back to a more comfortable ‘hovering at 100 or so degrees’. 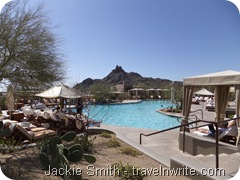 Don’t be put off by the weather report though, because mornings and late afternoons are great for poolside lazing.

We are loving “Arid Zona” and if you haven’t yet planned a summer getaway give some thought to heading to America’s Southwest. Hotels are offering some great deals (and rooms are air conditioned). Those resorts, like the Four Seasons Scottsdale where we are this week, are offering some great deals in their spas – also air-conditioned paradises. (That’s a photo of the Four Seasons pool with Pinnacle Peak in the background.) 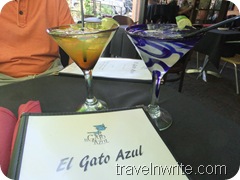 If that isn’t enough to bring you here, then let me tell you there is no better reason to sip a margarita than to cool yourself after a day in the sun.  We’ve been on a quest for the perfect one since arriving in the state – we’ll tell you where to find ‘em in a future post.

(These tasty treats were consumed in Prescott, AZ right after we hit town.)