“It’s not the Destination, it’s the Journey”  they told us as we began our afternoon aboard Arizona’s Verde Canyon Railroad.

The vast open spaces that gave way to sheer canyon walls towering above us, the winding river. . . well, what we had feared might be a touristy outing turned out to be one of the best travel excursions we’ve ever taken in our three decades of travel. 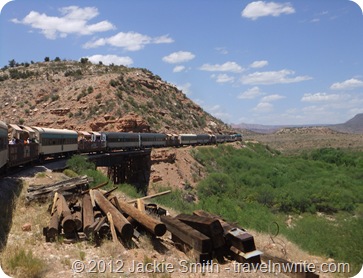 Two FP7 locomotives – and two of only 10 remaining in North America -- are the horse power for the renovated vintage passenger cars. We chose coach class (and saved more buying at the AAA discount price) although we could have opted for First Class with a glass of champagne or hired the caboose all for ourselves. (All were air-conditioned.) 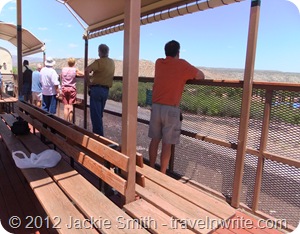 We’d planned to spend just a portion of the trip in the open-air viewing car but within minutes of pulling out of the station we knew we weren’t going inside . . .the views were so breath-taking we couldn’t tear ourselves away from that railing  – we stood the entire way, moving from side to side trying to see it all. (Yes, it was in the 90’s that day but the viewing cars had canvas covers.) 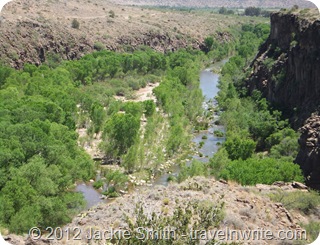 We traveled along the winding Verde River (verde; ‘green’ in Spanish) from Clarksdale, a one-time mining town, to what was once a train stop – Perkinsville - on the line that served this mining area in north-central Arizona. We passed mountains of slag, the remnants of those bygone mining days as well as cliff dwellings of the Sinagua Indians believed to date back to 600 B.C. 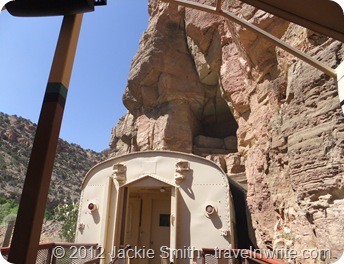 We passed through a 680-foot manmade tunnel and didn’t realize until we came out the other side, just how small that opening was: this is the car behind us as it emerged from the tunnel. 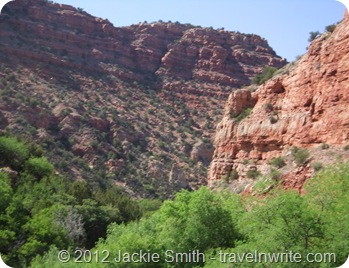 Cliffs towered above us and beside us, sometimes so close we could have touched them as we passed. 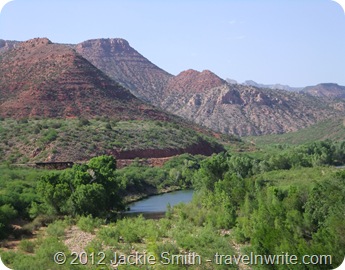 The Verde River Canyon was such an enchanting place that we want to do this trip again – and highly recommend it to those who find themselves in the area. (Clarksdale is between Sedona and Prescott). In addition to the daily afternoon trips, they have special holiday excursions and in the summer when the moon is full, or when it's not - under starry skies -- night-time wine tasting trips.  I can’t imagine anything more magical sounding than that. Can you?

I took dozens of photos but will stop here and encourage you to visit other destinations featured this week on Travel Photo Thursday hosted by Budget Travelers Sandbox.  For those wanting more information on Verde Canyon Railroad, schedule and prices, click the link in the opening paragraph to access their website.
Posted by Jackie and Joel Smith at 8:54 PM