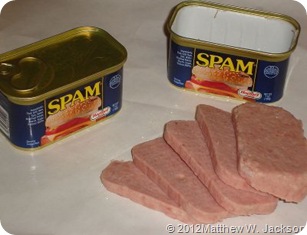 A conversation with two blogger buddies earlier this week found us in agreement on spam, those nuisance bulk emails that clog inboxes, but we had vastly differing opinions on SPAM®, the food.

I’m the lone SPAM® fan in this trio.

Blogger Ann, who normally muses about life, mused about eating anything that slides out of the can in a wiggling gelatinous wrap.  Blogger Dick, whose focus is community and education, simply pondered SPAM® and its relationship to public education.

SPAM®, we agreed, was a worthy blog topic for us all. Lucky for me, this announcement arrived in my inbox two days later: 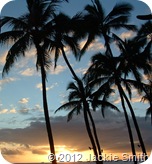 More SPAM®, according to one of the conference sponsors, is consumed per person in Hawaii than any other state in the United States, which makes it somewhat appropriate for their signature food festival.

SPAM® stands for ‘spiced ham’; a product introduced in 1937 by the Hormel Foods Corporation.  The food cube inside the can is a mix of ham and pork shoulder and now comes in low-salt, spicy and original (simply salty) versions.

Two key statistics in the news release caught my eye:

* in the decade since it began, the Waikiki SPAM® JAM, has become one of the most popular festivals in Hawaii. More than 20,000 are expected to attend this year’s festivities. 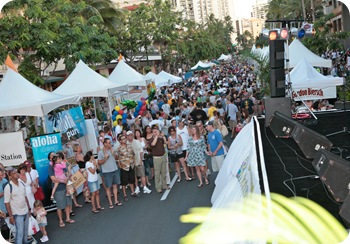 Waikiki’s main beach front drag, Kalakaua Avenue, will be closed to vehicular traffic. You can see why in this photo from a previous SPAM® JAM.

Some of Hawaii’s favorite entertainers will perform on two stages, and a dozen restaurants are serving up some crazy ono grindz (that’s ‘really good’ in Hawaiian) SPAM® dishes. A sample of the dishes being created and served include: 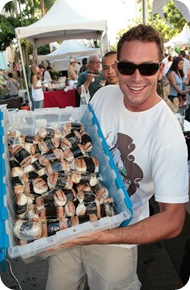 Aqua Café: Ono Mac and Cheese with SPAM® and a SPAM® Bento.


Admission is free.  But if you plan to attend keep in mind,The Hawaiian Food Bank will also have a booth at SPAM® JAM.  Since 2004, more than 10,000 pounds of SPAM® have been donated to the food bank thanks to this festival.

For more information, visit, www.spamjamhawaii.com.   Ever been to the festival? Tell us about it, or tell your own SPAM® story by adding a comment below or drop us an email.

Note:  Thanks to Wiki Commons and photographer Matthew W. Jackson for use of the SPAM® photo at the top of the post and to SPAM® JAM organizers for the other two photos used in this post.
Posted by Jackie and Joel Smith at 9:00 PM