We celebrated Thanksgiving in a most untraditional way this year a couple of hundred miles off the coast of northwestern Africa aboard the Celebrity Constellation.

And you know what? We had a feast and ‘family’ and football. . .so did we really need to be home?
Thanksgiving dawned a blue sky sea day during which we traveled between Gibraltar and the Canary Islands. It was easy to leave our Pacific Northwest traditional celebrations. 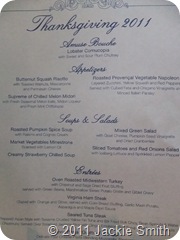 But when it came to the food and football fest usually associated with Thanksgiving, I can assure you, we had both. Just not in their usual trappings.

Turkey with stuffing and giblet gravy, glazed ham, seared ahi,  and penne pasta were among the entrée's on the dining room menu.

Jamie Petts, the ship’s Hotel Director, explained during my later interview with him, that because the ship’s roster is made up weeks in advance of the sailing, the passengers’ ages and nationalities are known and staff can plan on-board celebrations and special meals accordingly.

In our case, there were many Americans on board, so Thanksgiving menus were in order.  (Similar consideration is given to other holidays and national events in other countries, such as Canada Day and their Stanley Cup games, or even world-wide events like America’s Super Bowl.) 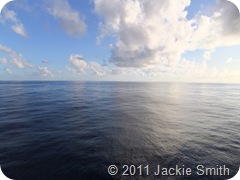 Food orders for our sailing had been made eight weeks in advance and shipped to the Constellation by container from Florida.

The ship’s staff made sure we had televised American football. But time zones put those games at the end of the day instead of the start, so kick-off for the last of the games was after midnight. 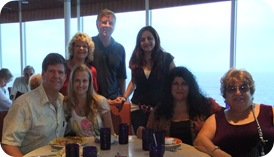 We had opted for ‘select seating’ on this voyage which allowed us to chose the time we ate dinner. Each night we sat with different folks who’d also selected this independent dining option.

On Thanksgiving we were seated at a table for six. . .a group that hit it off so well, we dubbed ourselves ‘the family’ and made plans to meet again during the cruise to continue our conversations. (The ‘family photo’ above was taken during our second, more casual, get-together).

Our Thanksgiving family was made up of a couple who split their time between the United States and Ukraine and a generational trio of ladies from California, whose family’s roots are in Jordan. Our conversations covered world history, politics, culture, travel, food and was mixed with plenty of laughter.  I hope we keep our vows to keep in touch. 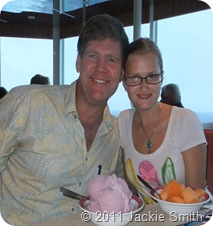 And we had two bloggers in its midst! Galyna Tate, (pictured here with her husband, William,) writes about her homeland, Ukraine.  I’ve been following her blog since our return – it’s entertaining and informative.  Just click this link and see for yourself: Galyna's Ukraine

We don't feel the need to be home for holidays. How about you? Where have you found yourself celebrating holidays?
Posted by Jackie and Joel Smith at 4:33 PM