So, who runs the hotel on this ship?

While our  Captain got us to our ports of call and ultimate destination, someone else was taking care of the hotel side of operations. On our recent  Celebrity Constellation cruise that person was Jamie Petts, our Hotel Director. 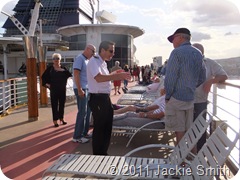 We’d seen Jamie several times on deck and at functions aboard our transatlantic cruise, and each time he was answering what seemed to us to be an endless stream of questions.  (As he was doing in this photo).

So, I almost felt guilty about my lengthy list of question as we sat down in  his office, just off the lobby’s Guest Relations counter, for an interview that I’d arranged prior to sailing.

I really didn’t expect to have the interview as he’d been rather busy the first few days of our cruise dealing with the ship’s sanitization after an outbreak of gastrointestinal virus on the cruise before ours. But he’d assured me that he had some time available. . .
Sure enough. The ship’s Events Coordinator called on one of our sea days and told me that my appointment with Jamie was set for 7 p.m. that evening. . .as in, long after an ‘8-to-5’ day would have ended.  But that’s not the way cruise ship life goes.

“You are on a ship for four months and off for two,” he said, acknowledging  that while on the ship he was basically on-call 24/7.   So a 7 p.m. appointment wasn’t unusual – for him, it was part of his work day. 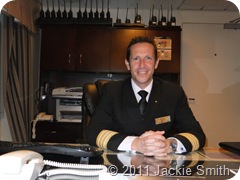 As Hotel Director, I was surprised to learn, that he’s responsible for: Food and Beverage, Finance, Data systems, the Cruise Director, the Guest Relations Manager, the Assistant Hotel Director, the On-Board Marketing Manager, Restaurant Manager, Bar Manager Executive Chef and the 850 crew members who work in those divisions.

He assured me that I wasn’t alone, as most cruise passengers have no idea the scope of the job, “One of the funny things is that when the Hotel Director is introduced people  always say, ‘The cabins are really nice’ and there really is so much more than just the cabins,”  he said, with his ever-present grin.

He left his home in Canterbury, England, where he still lives, and joined his first ship 14 years ago in Sydney Australia. He’s worked for other cruise lines and held a number of on-board positions along his career path. Three years ago he joined Celebrity. 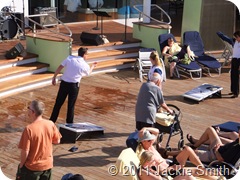 “This is a fantastic job!” he says, “Each morning I get up and I never know what my day will bring.  I love my interaction with guests and I am working with my family, my Celebrity family.” (Here Jamie was representing the officers in a bean bag toss competition with passengers.)

He’ll be leaving the Constellation soon. He’s starting his shore leave but don’t think he’ll be sleeping in when he gets back home. He’s about to become a dad and that will certainly make for some 24/7 days!
Posted by Jackie and Joel Smith at 6:41 PM