Yes, that healthy eating we’ve been touting for the last year – our Diet to Go, or D2G – met its challenge in Spain’s Tapa Temptations. 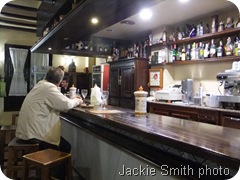 So we said “Adios” to that eating plan and each night saddled up to a tapas bar to eat our way through several of the small plates that offered a variety of meat, fish and vegetable tidbits; some of the best food we’ve had on our travels.

Potatoes and bread  – those things we’ve bragged about eliminating (or greatly reducing) in our lives this last year, were key ingredients in most of the tapas we ate. And Spain’s famous rice paella couldn’t be missed. . .

When in Spain eat as the Spanish do. . .and we did! In a manner of speaking anyway. Each night we’d wait as long as our American appetites allowed (somewhere around 7 or 7:30) and we’d go in search of a tapas bar. Tapas bars, like restaurants, don’t open their kitchens for hot dishes until 8:30 in most cases, so we’d work our way through cold dishes and wind up the feast with a couple hot dishes.

Tapas are generally inexpensive. So were the many varieties of Spanish wine we quaffed down with them.

Our best tapa dinner was eaten in Osuna, that charming small town outside Sevilla. The restaurant Meson del Duque, (Plaza de la Duquesa, 2, phone 95 481 28 45) had been recommended a couple of times so on our last evening we waited as long our our American appetites allowed and we headed out for what would be the culinary treat of the trip
. 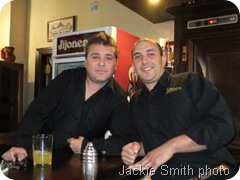 As usual ‘los Americanos’ (us!) were unfashionably early so we had the place to ourselves. . .which gave us time to visit with Jose, the owner, left, and Paco, the bartender, to his right in this photo. 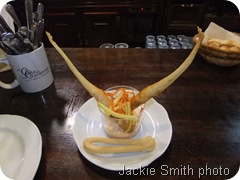 Since their tapas weren’t on display and we weren’t sure what was available, we asked Jose and Paco to select some plates for us.

They served us a mouthwatering short rib that you could cut with a fork, a fish dish, a pork dish and shrimp with a presentation resembling the horns of bulls in an unbelievably tasty sauce. 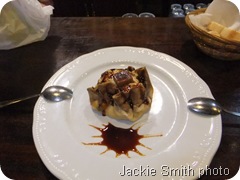 So good were the tapas that we fell further off the diet wagon and ordered dessert – again their choice. Need I say this chocolate morsel was good?

Our last night in Sevilla we dined at Casa Tomate ( on the 'tapa bar street' of Mateos Gagos 24, phone 954 220 421) and decided to try the combination plate of three hot and three cold tapas; to that we added a half racione (half order) of deep fried calimari.

As we started to order a salad as well – thinking we’d need a bit more, our waiter politely told us we didn’t need it – we had ordered plenty.  He was right as the tapas plate alone had anchovies, meat balls, veggies, Russian salad and a potato torte (tortilla): 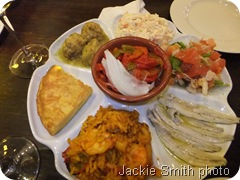 If you've been following the blog the last few weeks, I know you are probably thinking, "And then they got on a cruise ship for two weeks and ate some more?"  Yes we did, but I should tell you that we logged some 7 - 10 miles walking each day on land and on the ship either worked out at the gym and walked or did both.

While in Spain we marked the first anniversary of our D2G.  It has been a success despite the eating we did the last few weeks. We weighed in today and Joel weighs five pounds less than he did last year and I am down 13.5 pounds. . .and now that we are home we are back on the D2G way of eating.

Note:  The D2G is based on the Glycemic Load Diet as developed by Seattle doctor, Rob Thompson.  His book of the same title can be purchased from Amazon.com
Posted by Jackie and Joel Smith at 6:47 PM