Or,  'Ways to take a bite out of travel dining costs.'

A friend asked if we ever eat out on our travels as I’ve been so focused on ways we save travel dollars by eating ‘at home’ on the road.

Of course, we do eat out - just not every meal. 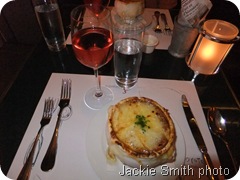 Recently we've discovered such a great way to enjoy haute cuisine – for as much as half off, that we just had to tell you about it.

First a disclaimer: I’m not a ‘coupon clipper’ (a popular money saving activity in the United States in which food manufacturers offer coupons for discounts of varying amounts on grocery purchases).  It’s not that I don’t like the concept, it’s just that when I have clipped them, I put them somewhere so I won't forget them, then can’t find them when I head out to the store and by the time I do find them, they've expired.

But a number of social media sites have been tempting us with coupon deals that we've been unable to pass up. These types of coupons must be purchased within a designated time frame and then you print the coupon when you are ready to use it.

It was friend and fellow travel enthusiast, Tara, who suggested we start watching these sites for deals in cities that we might be visiting. So now we have coupon offers arriving in our inbox from Groupon, Living Social, Amazon, Juice in the City, and yes, even Travelzoo.

We tested the ‘coupon-dining’ close to home at Purple, a wine bar and cafe in Kirkland. We had a great meal and glasses of wine for $15 - half the usual price. 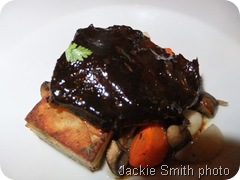 It was Travelzoo that tempted our palate with a deal at “Comme Ca” fine dining French Restaurant in the Cosmopolitan Hotel, City Center, Las Vegas: (Comme Ca is like the French phrase, Comme Ci, Comme Ca,--  kohm see, kohm sa, -- ‘like this, like that’)

We purchased for $79 a coupon for two three-course dinners (including a $30 bottle of wine) – regular value, $140. And then hoped the restaurant would recognize the coupon when we tried to use it. 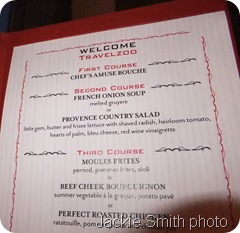 We shouldn’t have worried. . .not only did they recognize it, they had so many 'coupon diners', they’d printed a special menu for Travelzoo customers. (Our waiter said 1,100 coupons were purchased in the four hours the coupon was available). 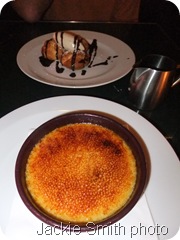 The photos I've included in the post take you from the French onion soup (a meal in itself), to the Beef Bourguignon, and of course, we couldn't resist sampling each of the desserts. All of which paired nicely with the dry French rose wine the waiter recommended.

Another Money-Saver:
We have joined a frequent diner club, Lettuce Entertain You, that offers discounts and points for dollars spent at a number of restaurants throughout the country – from Washington, DC to Las Vegas and cities in between.  We've used it primarily when dining in Vegas and have already accumulated enough points to have a significant discount on a future meal. We've also used 'my birthday' coupon for a $15 discount last July at one of the participating restaurants.

So how about you?  Have any tips to share about ways to save dining dollars?
Posted by Jackie and Joel Smith at 4:53 PM