A week ago today I was flying to Washington D.C. for one of those whirlwind trips that conference attendance often generates. The kind that allows only a few hours on either side of the event to get out and explore the area.

To those of us living on the West Coast, Washington D.C., on the opposite side of the country, is the ‘other Washington’– the one that requires an almost six hour flight to reach from ‘our Washington.’

That ‘other Washington’, is our nation’s political engine. That fact alone is a turn-off to many would-be tourists, who see it as a haven of politicians; a grandstand for their rhetoric and bickering. Others, like me, also see it as a treasure chest of wonders; museums, monuments and memorials showcasing so much culture and history that it would take weeks to visit them all.

So where to wander in a matter of  hours? 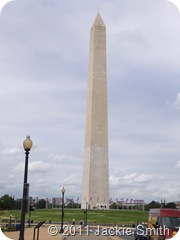 Three of us West Coast Washingtonians caught METRO and for $2.45 each way, whizzed  from Arlington, Virginia (where the conference was held)  to the National Mall’s  underground Smithsonian Station, from where we emerged to the sight of the Washington Memorial (pictured) to our left and the U.S. Capitol Building to the right.

From there we set out to pursue our own itineraries:

I headed to the U.S. Holocaust Memorial Museum (14th Street and Independence, 202-448-0400).  It was my third visit – and I could still return ten times over, each time learning/seeing  something I’d missed on a previous trip. You don’t tour this four-story archive of 1930’s – 40’s European history, you experience it. I used most of that afternoon’s free time pondering and shuddering at the story told through its 900 artifacts and 70 video monitors about  Hitler’s rise to power and the devastation that followed.

One of the displays  tells of the Hitler-ordered book burnings across Germany in the Spring of 1933.  Books authored by Ernest Hemingway, Sinclair Lewis,. . .Helen Keller, among them.

It wasn’t until this visit that I noted on the display window, a chilling quote written decades in advance of Hitler’s reign: 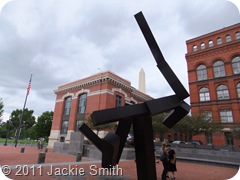 Admission is free.  What you experience here, stays with you for a long time. Photos inside the Museum are not allowed. I took the photo to the right as I walked to the Museum Café  housed in the building on the left; the Washington Monument in the distance.  The sculpture is titled, Loss and Regeneration.
******* 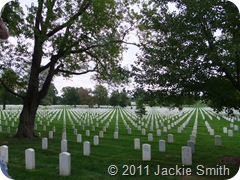 We managed another monumental ‘wander’ during the three hours after the conference’s end and our flight home. We again hopped Metro and for $2.20 each, emerged from the underground station at Arlington National Cemetery.
We opted – because of the short amount of time we had – to take the narrated, 45-minute shuttle tour ($8.50 per person) with the idea we’d see the whole place and if time allowed go back to those particular places we wanted to see a bit more in-depth. 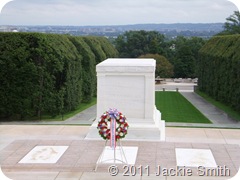 We scrapped that plan when we arrived at the Tomb of the Unknown Soldier within minutes of  the Changing of the Guard – an event that I now know shouldn’t be missed.
We were walking toward the Tomb when in the distance we heard the echo of a 21-gun salute. . .we were told that some 25 military burials take place each day. . .
As we waited for the human guards to change, we watched a Bald Eagle, our national bird and our country’s symbol, soaring  overhead, as if the ultimate guard of the more than 320,000 servicemen and women buried within Arlington’s 624 acres.
And then the Changing of the Guard: 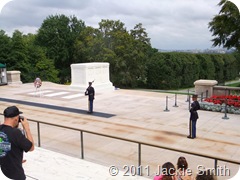 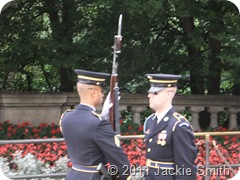 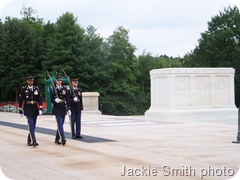 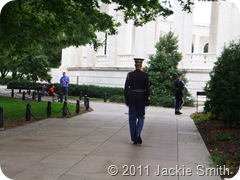 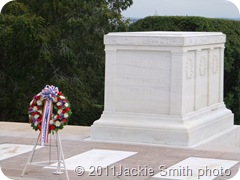