A Luxury Hotel. . .that floats!

Maybe they could be called motorized hotels . . . 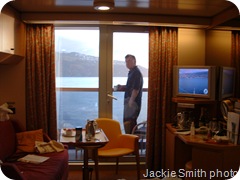 Universally called “cruise ships”, enthusiasts of this mode of travel, don’t give much thought to the hotel operation – you select a cabin, or it is selected for you; you like it or you don’t.  Simple as that? Not really.

We really hadn’t given much thought to the hotel side of cruising until we crossed the Atlantic Ocean and had the opportunity to meet and visit with the person who was responsible for the hotel side of the Celebrity Solstice. 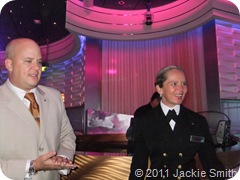 Our Hotel Director Sue Richardson, who hails from the market town of Stamford, England, after earning her Hotel Management degree, began her career at sea in 1988 as Chief Purser and Hotel Director with Royal Caribbean International.

Today her resume would make for a tropical sea novel or movie:  she lived for three years on Bermuda managing a  Boutique Hotel Resort, has worked on a 126-meter (410+ feet) private yacht, and spent three years as a hotel director for Silversea Cruises prior to heading to Celebrity.

On our cruise, it seemed that she, just like the Captain, managed to be everywhere, no matter what the time of day. She’s pictured above with Paul Baya, our Cruise Director, during a welcome cocktail party for returning guests. Below she, and other senior staff members, welcomed us back to the ship after a stop in Lisbon. 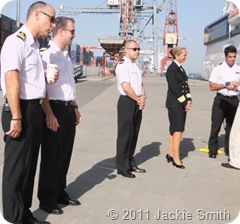 Over morning coffee with me one sea day, she described her work life as 24/7 during the four to four and a half months she’s on the ship. On the flip side, she is off the ship for an equal length of time, which allows her to pursue educational and travel opportunities and spend, perhaps more, quality time with family and friends than some,who have traditional 8 – 5 jobs and weekends off.

Just like land-based hotel directors, she manages a team of people who are responsible for the operation and upkeep of  accommodations -- in this case -- the 1,235 cabins and 56 suites on the ship, and for keeping the guests happy and entertained.

“It is all about service,” she said, “Service is a feeling. What was the feeling about the experience?”

Judging by the number of returning guests on this cruise – 613 people who had logged more than 10 Celebrity cruises – Richardson and her staff (and their counterparts on the line’s other 10 ships) seem to have nailed it.

Note: The cabin photo above was our balcony room on a Holland America cruise ship.
Posted by Jackie and Joel Smith at 12:06 PM