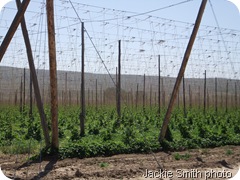 This week's focus is on the Yakima Valley, where I grew up, because  nearly 80% of the United State’s hop crop is grown there.

And for those of you who don’t drink brewskies (aka beer and/or ale) hops, well, specifically, the hop flowers that grow on the vines are one of the four key ingredients used in the liquid gold. 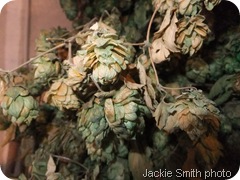 I wrote an article about Yakima’s hops that appears in today’s Seattle Times, so I won’t tell you any more than to click on the link to the paper.  Even if you don’t read what I wrote, be sure to check out the photos as the paper’s photographer did a spectacular job and they created a great map that you could use should you find yourself ‘hop-ing’ through the Valley as I did.
Posted by Jackie and Joel Smith at 7:07 PM