Over coffee with a friend, I said we missed Greece and were thinking about a return visit.

“Greece?!! It is rather unsettled right now. . .are you sure you want to go there?” she asked, obviously influenced by the recent media reports of Athens' protests and riots.

In reality, many of our favorite places are 'unsettled' right now.  Some just don't make headlines back home as does Greece.  For example, our trip to Spain this spring: 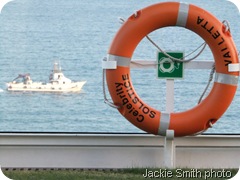 In Malaga. . .
. . .a popular cruise port on Spain's Costa del Sol, we experienced, first-hand, a Spanish work 'slow down'.  We'd signed up for a ship-sponsored "Granada on Your Own" tour (a two-hour bus trip each way, with refreshment/rest stops mid-point). On our return trip we were perplexed by the driver's delay in finishing his coffee - our agreed upon 10 minute stop found us all sitting in the bus, waiting, and waiting and waiting for the driver.

We simply figured the guy was a flake; his -- make that, their --message was lost on us.  Later arriving shore-tour passengers, however, got the brunt of the delay, with long waits at security that finally required our top brass to intervene in order to sail away on schedule. 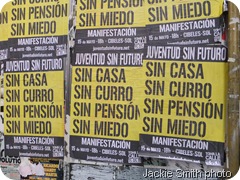 While in Madrid. . .
. . . Spain's magnificent capital, we were closer to protests than we ever have been in Greece. (With the protests there centered in Athens, we've avoided mayhem by heading directly to their calm, laid back islands.)

We watched a Madrilenos' manifestacion (protest) in the city's famed Puerto del Sol grow to tens of thousands in just a few days. Spain's elections were being held near the end of our stay and lots of folks, it seemed, had a message for the candidates. Puerto del Sol, the very heart of Madrid,  had been the gathering place for families, young lovers (and of course pickpockets) on our first stroll through it, but by the end of our stay, the crush of manifestacion crowds and media trucks had made it a place to be avoided. 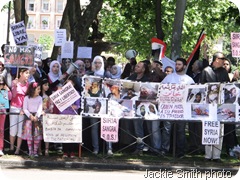 Our route often took us past the Syrian Embassy, a few blocks from our apartment. For several days we noted a  group of peaceful protesters who stood across the street from it; their sign boards demanding human rights for those in their country. 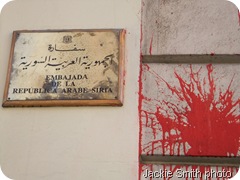 As we passed the Embassy one morning we noticed the red paint splatters that soiled the front of the building. Upon our return two hours later, they had been removed.

Just down the road, a more amusing group of protesters were Madrid’s firefighters who'd set up a camp ground of sorts along the upscale Paseo del Prado.  Their message, it seemed, was unhappiness with their lot in life but set amidst a 'glamping' sort of camp with frequent trips to the nearby Starbucks for coffee and treats, again, their message was lost.

Another day we heard music playing and saw a small group dancing on a sidewalk. Their signboards were were a party pink.  It wasn't until I was taking a photo of what I thought was this street celebration that I  realized it was a protest; an outcry against children who are living in rat infested conditions. 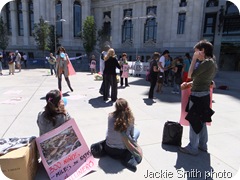 These 'unsettled' scenes aren't limited to Spain or Greece.  We  found those in Madrid to be interesting - not threatening or unsafe. And for each of the photos in this post, I took dozens more showing peaceful, beautiful scenes in the same city.

So the world is 'unsettled' these days, that's the reality of travel. But instead of musing about Greece we should figure out a way to get back to it AND Spain. . .as soon as possible.
Posted by Jackie and Joel Smith at 3:33 PM