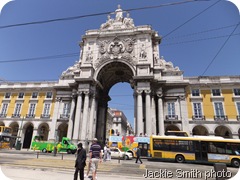 “Once upon a time” as this travel fairy tale begins,“two cruise ship passengers set out on a train from Lisbon and found themselves some 40 minutes later in an enchanting place. . .a place of castles, kings and goddesses.”

It was tempting to spend the entire day-long cruise stop in Lisbon, Portugal's capital of more than a half million people, because it offers plenty to see and do. But we'd hit the highlights on a previous cruise stop so it was time to venture a bit further afield on one of our 'do it ourselves' outings. Little did we expect to visit a fairy tale. . . 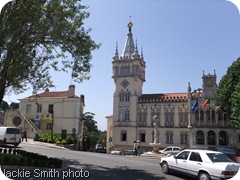 . . .when we traveled to Sintra, Portugal.

Prior to the cruise, Joel had read up on taking local trains to either Cascais or Estoril, on the coast or inland to Sintra (see map below). Any of the three sounded good, but the latter won out and we headed to this picturesque hamlet in the Sintra Mountains -- once a retreat of Diana, the huntress, or so the legends go -- today a popular tourist stop; a village of palaces and castles.

After spending the morning in Lisbon, we popped into the train station to check out the schedules and prices. Within minutes, we'd purchased round-trip tickets from the teller window (nice not having to figure out a machine).  Signs above the track directed us to the correct train.

We could have taken one of two ship's tours that included both Cascais and Sintra, but we generally shy away from those crowd-cramped outings. In this case, a commuter train runs regularly to this town of 33,000, a stark contrast to Lisbon. Our train tickets cost 4.10E ($5.85US) p/p round-trip, comparing favorably to the ship's tours at $45 and $118 p/p. 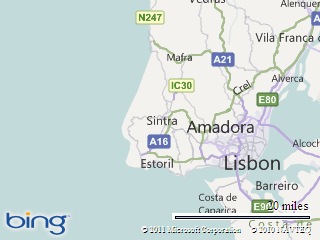 The train made several stops in Lisbon's graffiti-wounded suburbs then picked up speed as it carried us to this UNESCO World Heritage site, where the only blemish on fantasy seemed the number of large tourist buses inching their way through Sintra's narrow tourist-jammed streets.

We didn't have enough time there, a common dilemma of cruise ship stops whether done independently or as part of a group. But we did have a leisurely cup of coffee and sampled Portugal's famous white wine, vinho verde, while we watched gaggles of tourists return to their buses. By being on our own we had an hour longer in the town than the 'bus people'. We'd also simplified the trip by buying round-trip tickets in Lisbon which gave us more time to enjoy Sintra without searching for return ticket machines.

If you can't get to Sintra, click the link above for a YouTube tour. If you do follow our trip, make sure to allow yourself time to get back to the cruise ship after arriving back in Lisbon's central train station.  You'll need to take a taxi or public transport as the cruise ship dock is not walking distance. 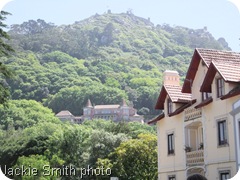 Posted by Jackie and Joel Smith at 9:05 AM